Design researcher Xiaofang Zhan was selected for one of British Council's Crafting Futures grants in 2018. She travelled to Jingdezhen in China for her residency, where she explored the relationship between design and craft, and how collaboration among local artisans, artists and designers can offer possibilities for the future of craft today. She tells us more about her research and what she discovered.

I am a design researcher who works in craft. The reason why I combine craft with design is because design fits well with the creative nature of craft and its implications. Based on my previous research on porcelain in Jingdezhen, China’s pottery centre, I embarked on my Crafting Futures research residency to further investigate the city’s craft revival and collaboration among local artisans, artists and designers.

Jingdezhen is a historical city located in Central China, close to where I was born. It was a wet and chilly winter in Jingdezhen. Though it was not the best season for ceramic-making, you still didn’t have to go far to see people throwing, painting, carving and baking besides the road. It was a place where the water rushing through the mills and the fire cracking in the kilns never ceased, and today, it still is, but in a slightly different setting.

An American artist told me that he saw a three-in-one society in Jingdezhen, by which he meant that the elements of agricultural, industrial and post-industrial could be all found in Jingdezhen. In this single city you can see a thousand-year-old water-powered stone hammer still crushing the kaolin stones, several muscular throwers working together to throw a gigantic vase, alongside high-rises on both sides of street, rows and rows of pots just out of the electric or gas kilns, gentrified and chic stores and galleries on the old-factory sites, and stylish restaurants full of local characters just around the corner. 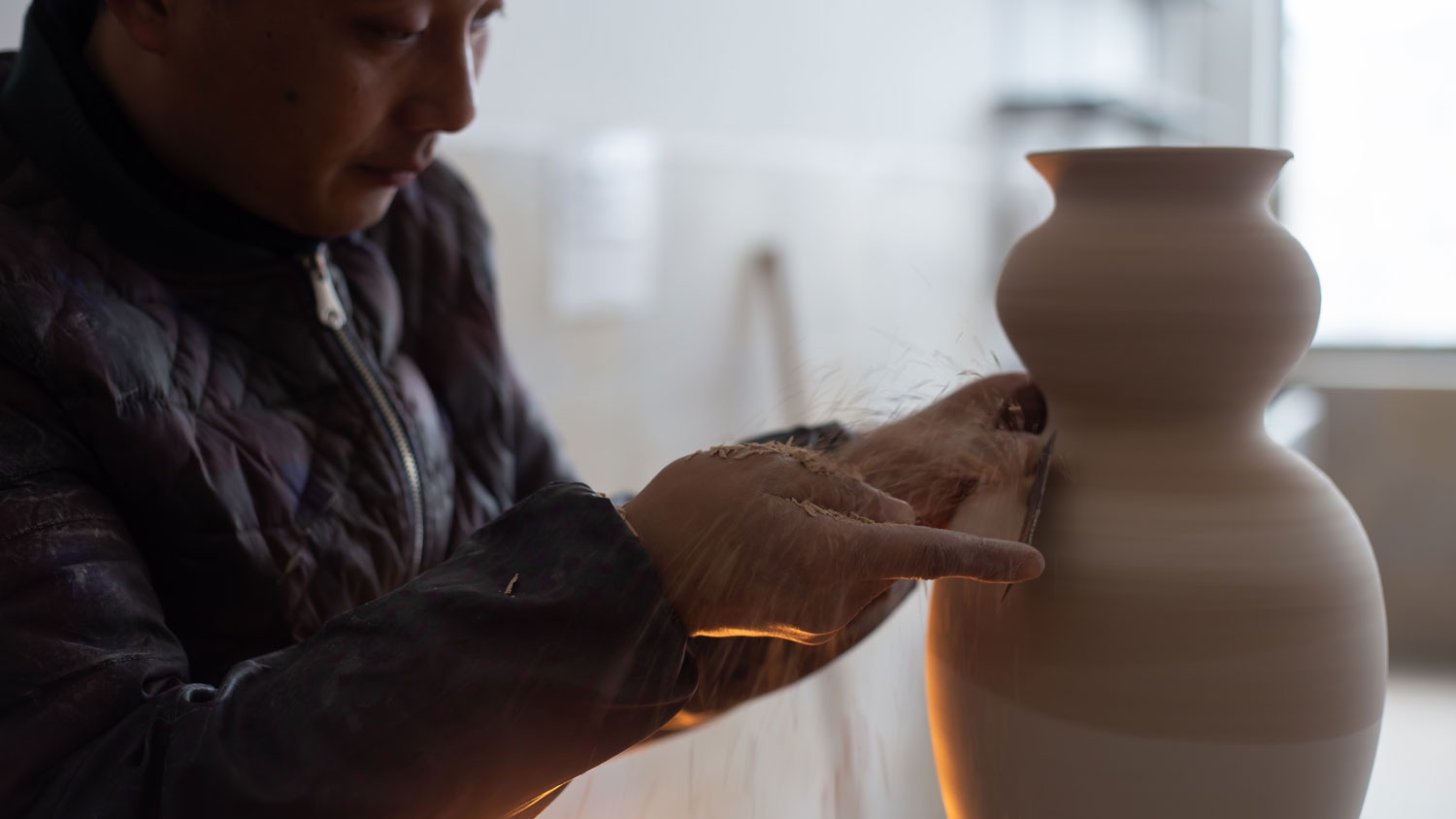 A craftsman working in Jingdezhen

Professor Lili Fang, a scholar in Art Anthropology and Ceramics, said; “the landscape of ceramic-making in contemporary Jingdezhen is neither preindustrial nor modern; it is of a sense of postindustrial (the both with something else).” Pondering on her words while talking with various people in different workshops, streets, galleries and stores, I understood her “the both with something else” as an alternative way of post-Fordist production; I would tentatively call it “post-craft” making. Since the middle of the 1990s, when the state-owned factories were shut down, centralized mass production has been demolished and autonomously rebuilt into numerous small specialist workshops by the artisan-workers scattered around the old-factory sites and villages. Due to the flexibility, and compatibility to the model of small batch production, the traditional skills have been retrieved and revived in these workshops through reiterative experiments. These highly-skilled artisans and their workshops have then attracted many artists and creatives, including a considerable number of foreign artists and ceramicists, to come and work with them. This autonomous revival of traditional skills over the past 25 years is driven by effective collaboration between the local artisans and the creatives (mainly artists and designers). Considering these two completely different types of people and skillsets, how they could work with each other and bring a revival of Jingdezhen’s ceramic industry into such a scale, really amazed me. 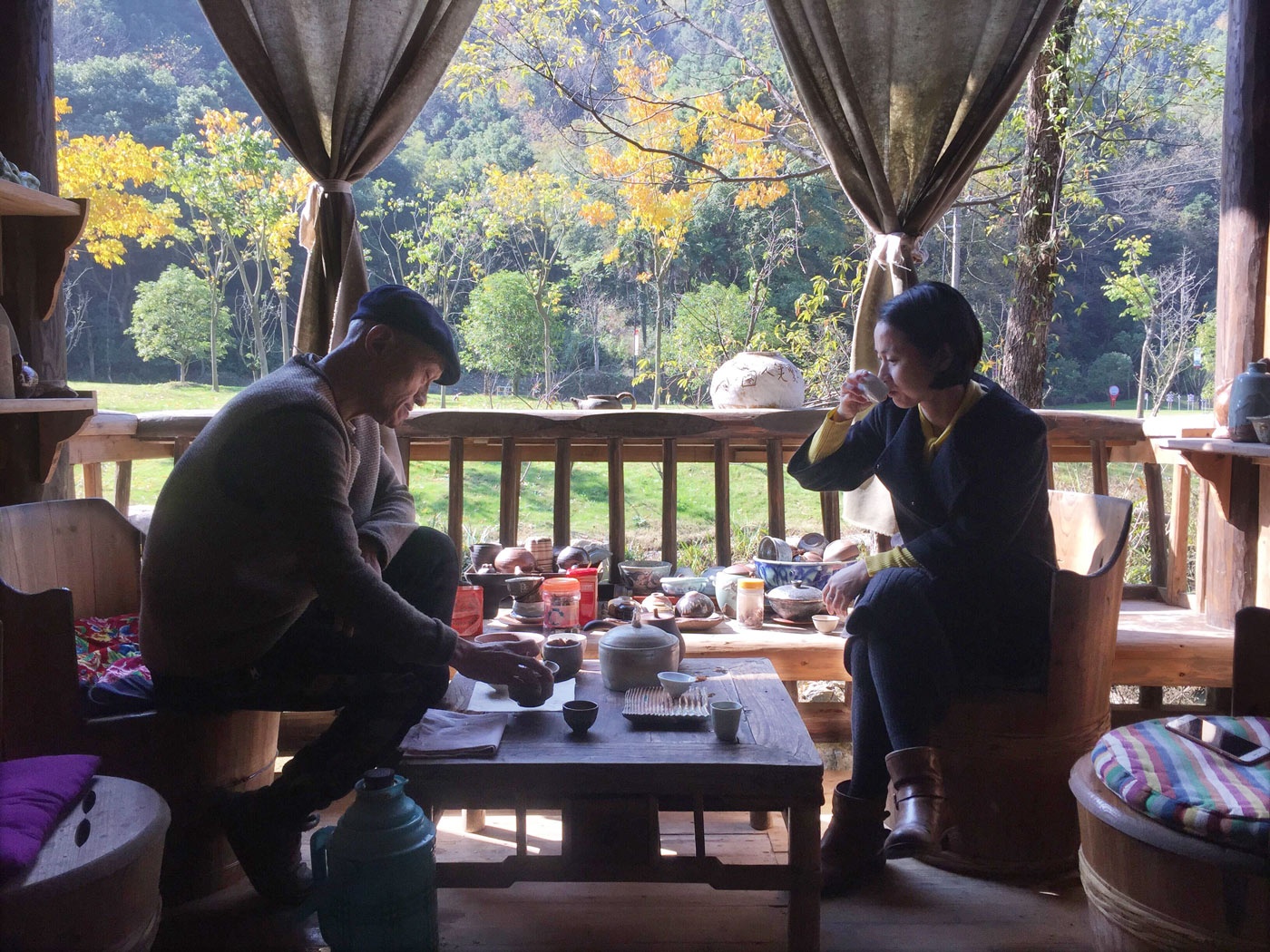 Xiaofang Zhan having tea with Jackson Li at Sanbao International Ceramic Village, the pioneer of Jingdezhen's revitalisation of ceramic culture

To further understand the underlying mechanism of this “post-craft” production, and how craft’s value can be created and transferred in the collaboration process among these completely different groups of people, I conducted a series of interviews, a co-creation workshop and an experimental practice-based project with people in the community. With the support of Jingdezhen Ceramic Institute, the workshop and experiment were successful and fruitful. This enabled me to see the process of collaboration in action and eventually helped me develop some initial ideas. 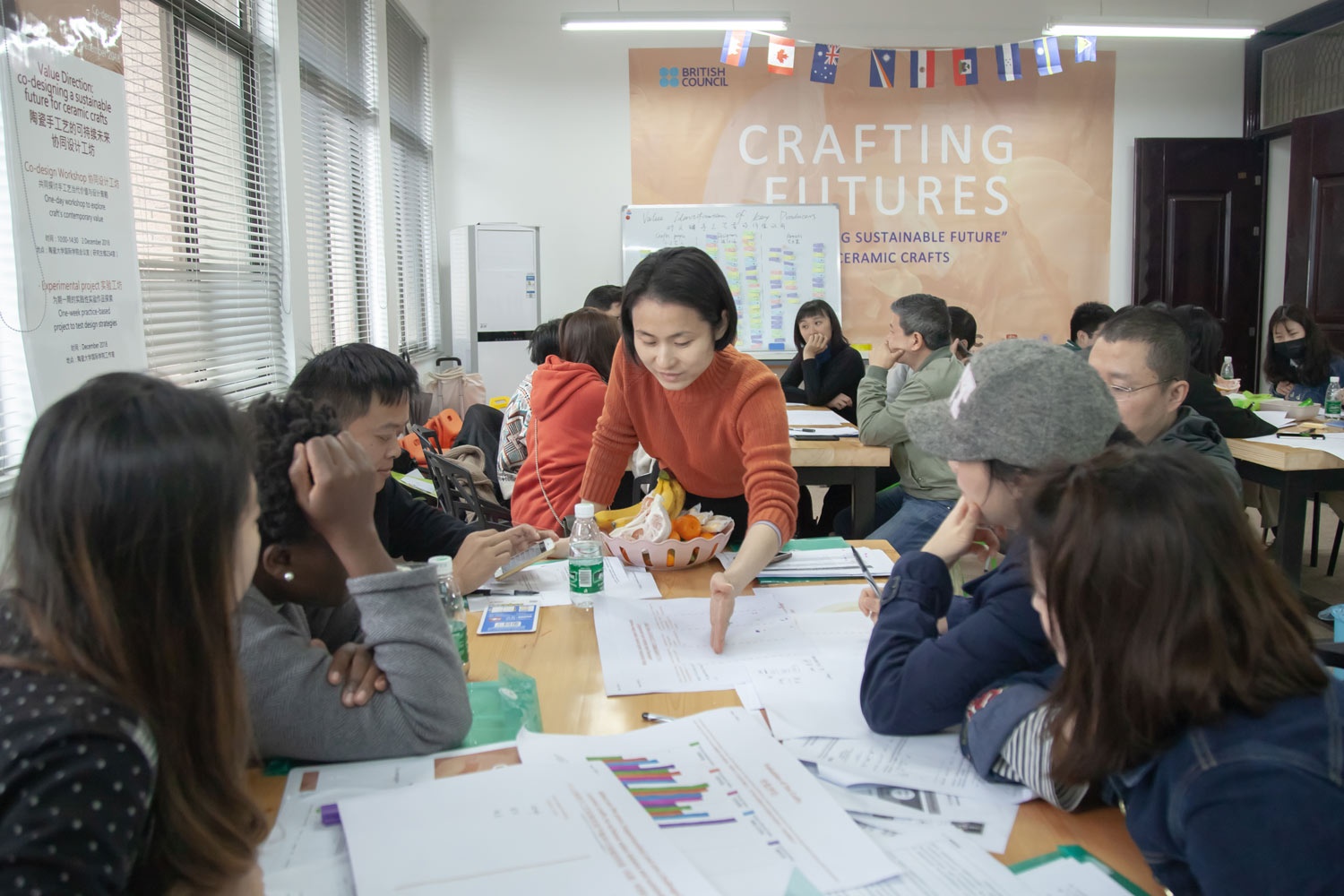 First, central to my findings is that craft knowledge and skills are ecological and social instead of individual, residing in the interaction between one person and another, and between people and their surrounding environment. Unlike some craft practices in the UK, ceramic making in Jingdezhen works through an organic network of people, in which the elements of artisanal technique and avant-garde, the old and the new, the cosmopolitan and the local, the people who work with their hands and those who work with their minds, meet and work closely together.

Second, blurring the boundaries between daily life and workspace is crucial for creating a space for triggering a meaningful dialogue between the designer and the artisan. The two-week experimental project I conducted with ceramic artists, designers and local artisans demonstrates how important this blurring of space is to an effective and fruitful co-creation. In Jingdezhen, you find workshops where artists and creatives live and work together with artisans. Empathy and creativity can never be generated by the linear model of draft-making-result. 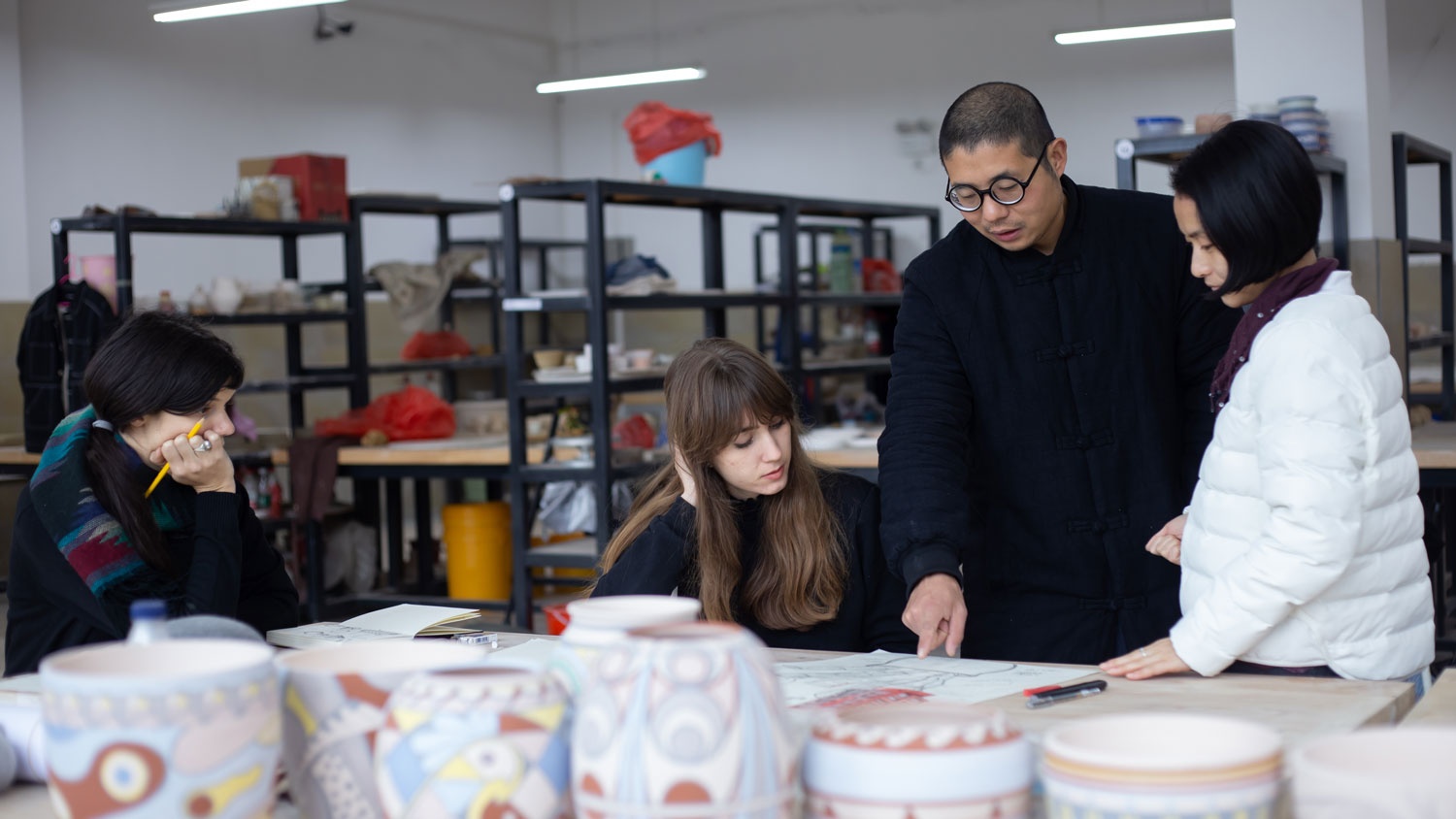 Third, in Jingdezhen, there is no hierarchical structure in the production model and between the people involved, which took me several years to work out. As a native insider, it’s not easy for me to reach this conclusion, because this seems to turn my previous view around. As Takeshi, the former co-director of Pottery Workshop, said, “everything here is so flexible and organic”. I think it not only depicts the model of ceramic production where you could collaborate with anyone and any workshop as you wished but also reflects an attitude and mindset in the community. Artisanal knowledge and skills are highly regarded as well as artistic creativity in this society. Because artists, designers and even young ceramicists know their limits, they rely on artisans and highly respect the master artisans’ work. Despite various criticisms in government’s priorities in policy and business model, in most productive workshops, no one dominates the other. I could strongly feel that every time the master thrower came to help develop the project in the studio, how concentratedly his teammate artist and designer stood to watch and learn, and how attentively they listened to the master thrower’s comments on their drafts and proposals. Every time master artisans came into the studio, it attracted many design and ceramic students to come and watch, and a PhD designer once regretted “it’s a shame that I am not there”. If there is a hierarchy, I think it would only exist in the proficiency in skill and creativity achieved through constant practice, attentiveness, and the negotiation with the materials and collaborators. 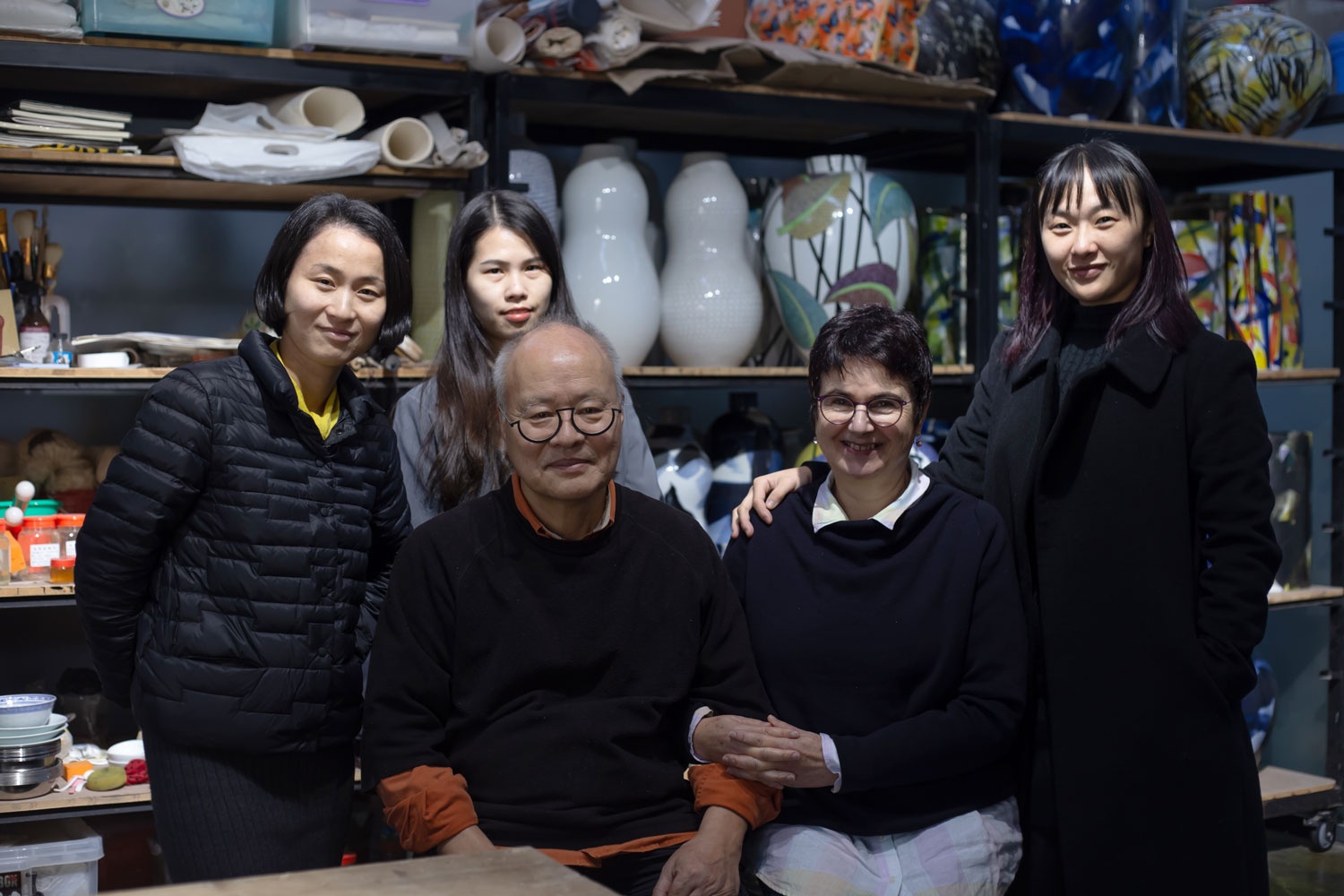 However, there is also a problem with the collaboration. Tradition doesn’t mean perfect and static; it is always in the process of changing and adjusting to the current context. Though most artisans in Jingdezhen are highly skilled and work with traditional methods, they seldom change or innovate the techniques. Even though young ceramicists are learning the skills from artisans and trying to innovate so as to fit with the new designs and needs, it is still insufficient to meet the increasing demand of the creatives in this fast-changing society. As a consequence, many designers have had to compromise their ideas to the limitations of traditional methods. For example, some highly skilled painters can only paint the colours or patterns in a long-established way and won’t change it to fit with the new designs or patterns that designers proposed, while ceramic designers can’t actualize the expected effect with their limited skills.  It takes a long time to master one kind of skill. Expecting a designer to master a skill in a certain period is unrealistic. Therefore, there is a need to raise artisans’ awareness of change and boost their enthusiasm in innovating their methods and techniques. This change is needed if we want to genuinely sustain Jingdezhen’s craftsmanship in the long-term, instead of utilizing it merely as a resource. In this sense, craftspeople and designers are not necessarily one and the same, but a flexible space for both parties that can engender respectful and meaningful collaboration is crucial to integrate this different knowledge. 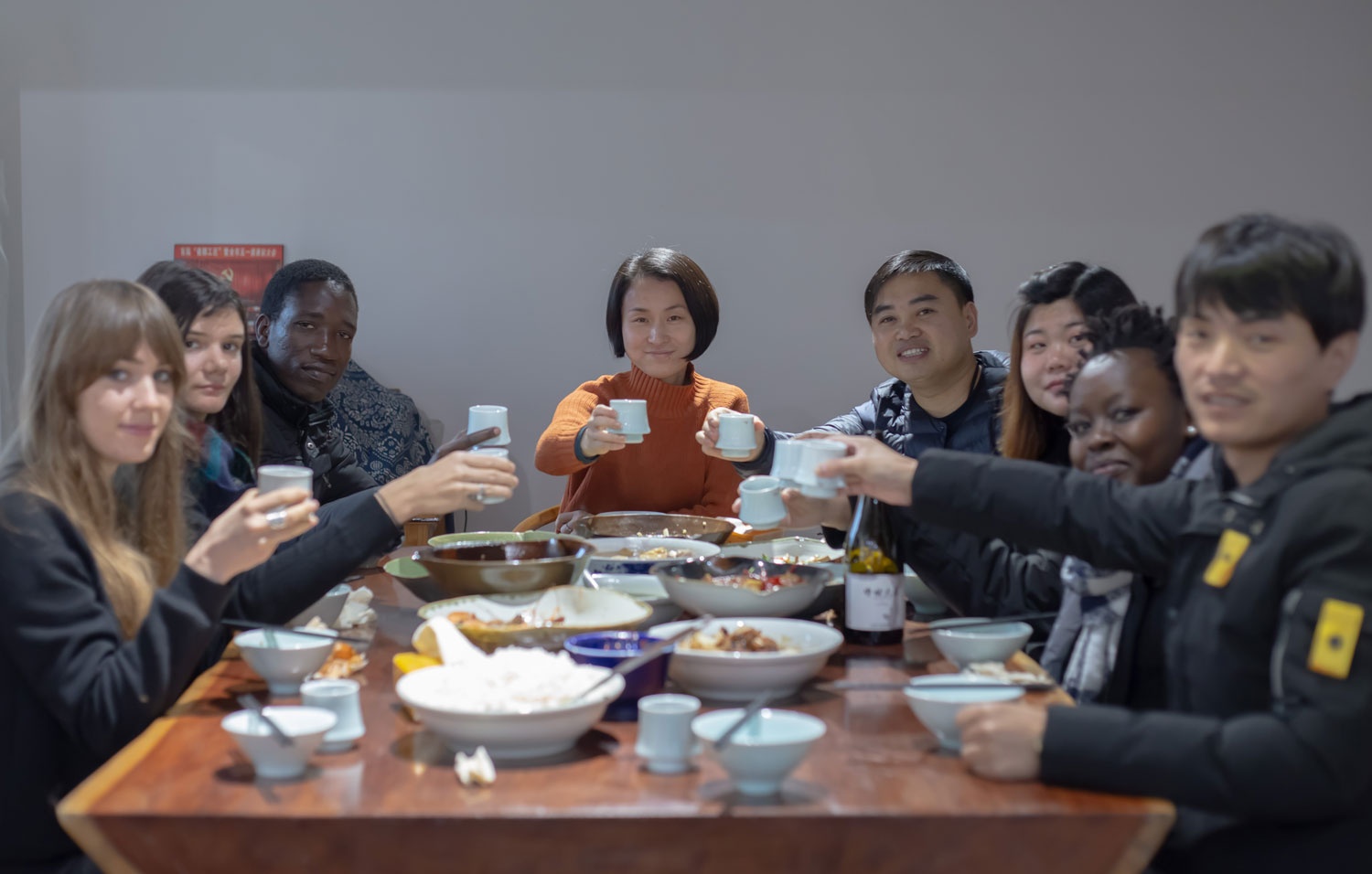 The failure of tackling the increasing problems in recent years, as Sheehan warns, reflects an “ontological flaw” of modern ideology-oriented development, “in which every being and every value [are] eventually consumed by self-serving production”. Creativity and innovation are not just a privilege of artists and designers’. Artisans are willing to change and can innovate their skills which is evidenced in the experimental project. However, important to this change is whether the three findings outlined, can be fully recognized by the stakeholders and therefore enhanced in future collaboration to ensure the future of craft.