There is always a sense of "spirituality" in ZHAO Kun's sculptures. Whether they are animals or urban dwellers, they all possess a strong artistic style, which is memorable after viewing. The reason why Zhao's works stand out is that she embraces the uncertainty in the process of material selection and creation, integrating the experimental spirit of modernism into the traditional Chinese artistic conception. Aside from being loyal to artistic expressions, Zhao Kun also embodies traditional cultural values in her artworks. 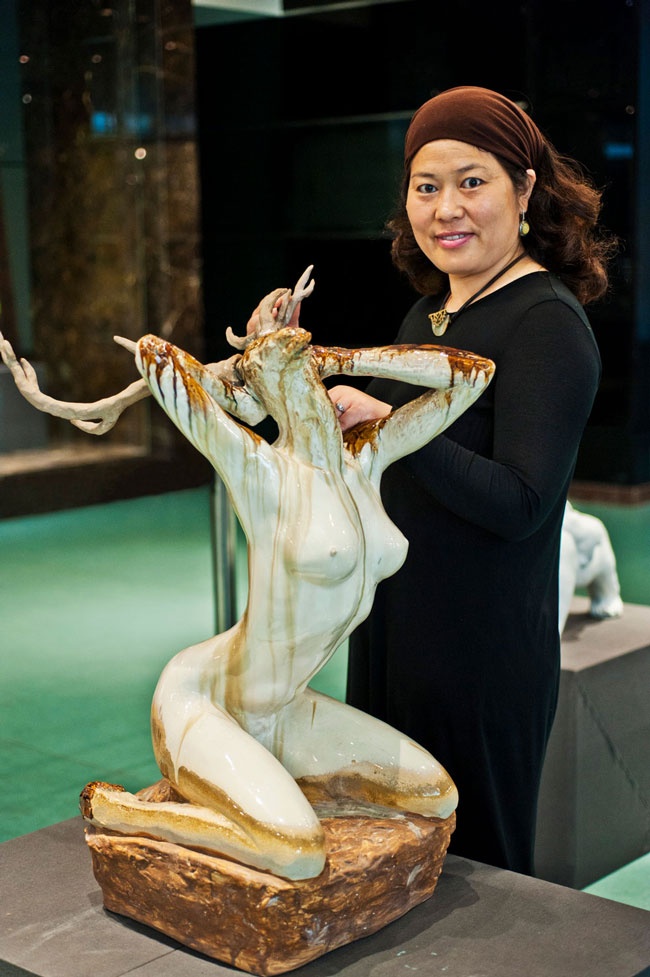 Establishing The Signature Style in Sculpture

Sculpture is not a popular craft in Jingdezhen due to the limited market and few enthusiasts. Many artists engaged in sculpture have turned to other industries. Zhao is one of the few artists who has persisted and devoted to creation for more than three decades. Initially practiced in painting, she fell in love with the artistic image of ceramic sculpture which conveys strong emotions whether in abstract or concrete forms. "I think the process of sculpturing is delightful and incisive. Just like Nuwa (the mother goddess of Chinese mythology), I can create a stereoscopic figure from scratch." She said. It is Zhao Kun’s pure passion in sculpture that paves the way for her unique style.

Looking back on Zhao Kun's creative process, what remains unchanged is her loyalty to her inner feelings. Her first sculpture work during school days was “Wolf’s Howl”. Feeling different from others, she delivered a sense of loneliness and uneasiness through this sculpture. This work also laid the foundation for Zhao's future, which is meant to be different from others. Owing to her love for creative materials, Zhao often collected stones and mixed glazes by herself in the early years. After trying with various materials, she finally settled with ceramics and clay slabs. Ceramics are versatile and can be painted. They also contain traditional Chinese elements. As for clay slabs, they are often pieced together, similar to traditional Chinese brush strokes. 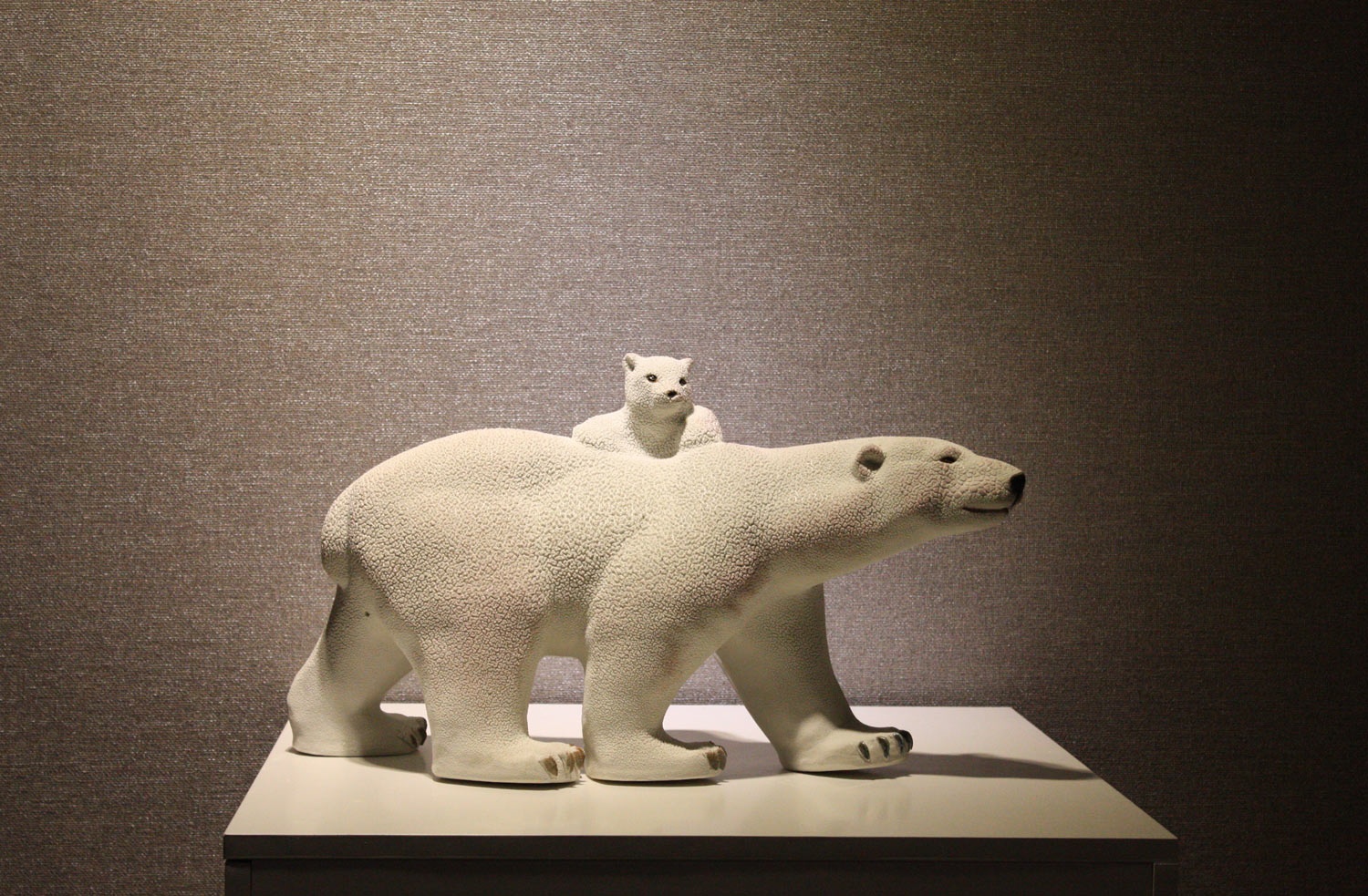 The reason why ceramics and clay slabs attract Zhao Kun is their uncertainty. The glazing process of ceramics requires burning, and the color changes significantly. The reflective points, space, and thickness have to be taken into account. Once the color is wrong, the texture and the shape will be different. The mud slabs produced in Jingdezhen are fragile with limitations in creation, and the final form is not necessarily the same as the original concept. These two seemingly unfavorable characteristics of the material surprisingly became the reason why Zhao Kun chose them. Due to the unpredictability of the final products, Zhao has discovered the connection between them and traditional Chinese arts.

Chinese arts, such as calligraphy and traditional Chinese painting, pursue the "artistic conception" rather than the "outline", and so does clay sculpture. What completes an artwork lie in the artist's intention, and the audience’s interpretation from personal experience.

Unlike Western sculpture which emphasizes realism, Zhao Kun's sculptures are different in line, shape, and color. Although with uncertainty, the artworks transcend themselves, blending artistic conceptions with reference to the past and the present. 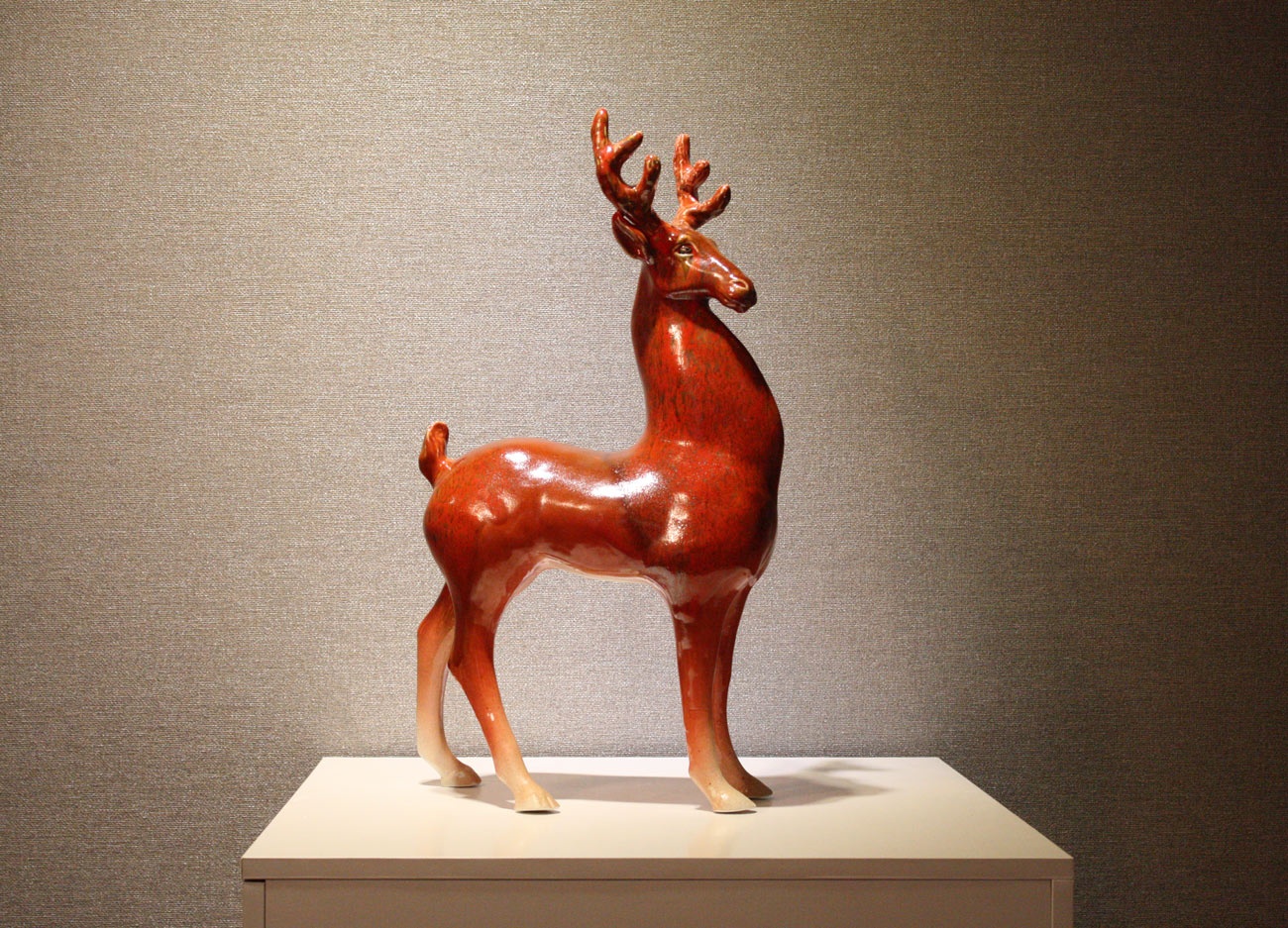 For Zhao Kun, the choice of theme, whether human beings or animals, both emphasize on if they can convey her ideas. Zhao Kun refers to artistic traditions in her modern sculptures and combines the seemingly contradictory concepts. Whether tradition and innovation, wildness and civilization, they are not opposing concepts but instead the complement of each other. Zhao Kun transformed the visual aesthetic function of artworks and embedded the glow of humanity behind them.

In Zhao’s exhibition “Into The Jungle” in 2018, a series of ceramic animal sculptures shows the pureness of naturality. It is essential for individuals to return to basics and reflect on their lives.

The series "Urban Dwellers" embodies this value even more. Zhao originally imagined a woman riding on a leopard, but she eventually integrated the leopard and the woman into a representative creature. The leopard, raising its head to howl, lowering his head to reminisce, is as contradictory as the restless human soul. The work not only depicts the creature itself but also symbolises the city's hustle, questioning whether people can stop to reflect on their lives and surroundings. 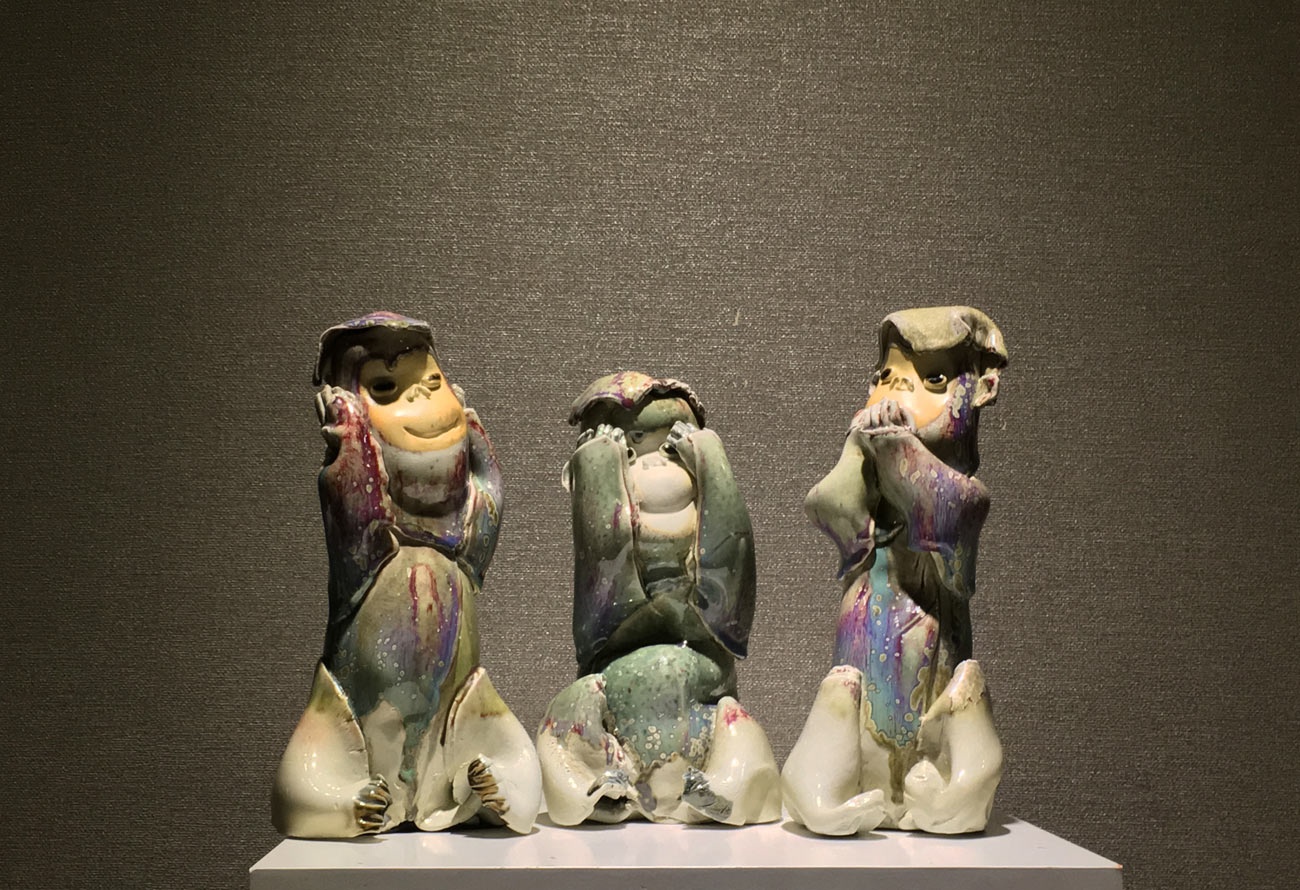 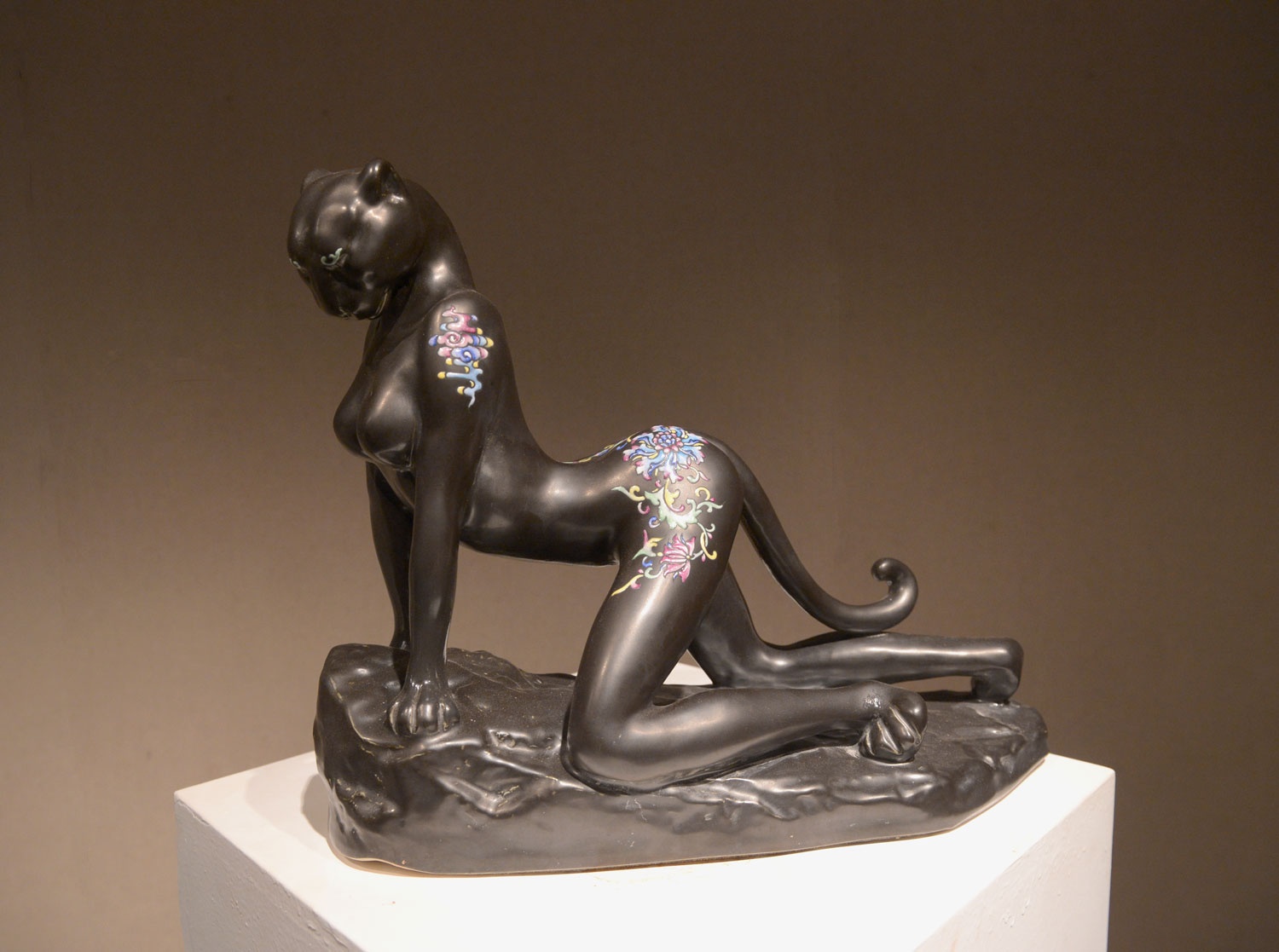 Zhao Kun's sculptures are widely recognized by the public and the international communities, and have exhibited in The Louvre, Japan and Korea, but she still embraces criticism because she believes that controversy can encourage everyone to think. For instance, "Urban Dwellers" has aroused controversy, but also received many praises. For Zhao Kun, why criticism exists is because the public has specific expectations about what constructs a good work, but the so-called "aesthetic" can change from time to time. As in ancient times, different dynasties have manifested different characteristics of sculpture art, which show that art appreciation can take many forms and is worth exploring in modern times.

It is the same for sculptures that traditions and innovations can co-exist without division. Modern works can highlight their value by drawing reference from traditional arts. Zhao believes that even if the public has less acceptance of ceramic sculpture compared with other arts, as long as the artists can focus on creation, with the support of the society and the government, Chinese ceramic sculpture can still prosper.

Throughout Zhao's journey in sculpture, it is her love and persistence that enables her to devote to creation, breaking away from market constraints. Therefore, each of her work has its uniqueness with traces of Chinese traditional art, from lines, patterns, to colors. Zhao Kun's art continues to move the public, and establishes an extraordinary and diversified appearance for Jingdezhen sculpture. 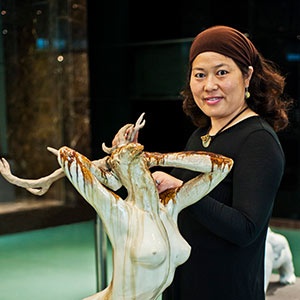