As an award-winning graphic designer and a member of the Alliance Graphique Internationale (AGI), HONG Wei’s furniture design has a strong graphic appeal in its abstract forms. Hong has managed to bring years of in-depth studies of Chinese characters and traditional culture for his graphic works into the discipline of furniture design while keeping the consistent beauty of simplicity and elegance throughout. Hong’s furniture extracts the essence of the classic Chinese elements and transforms it into new forms of ‘Neo-Ming’ style. 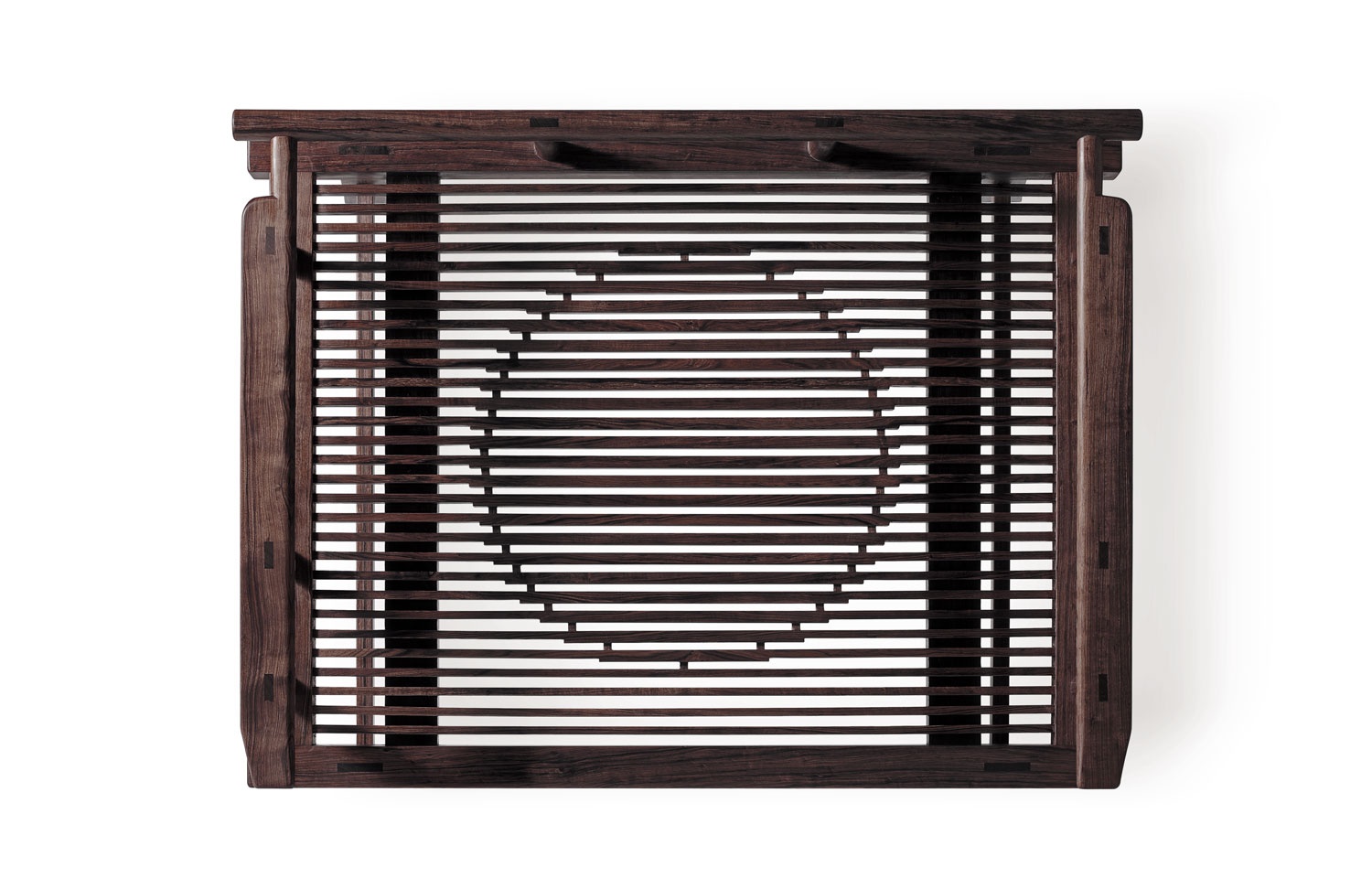 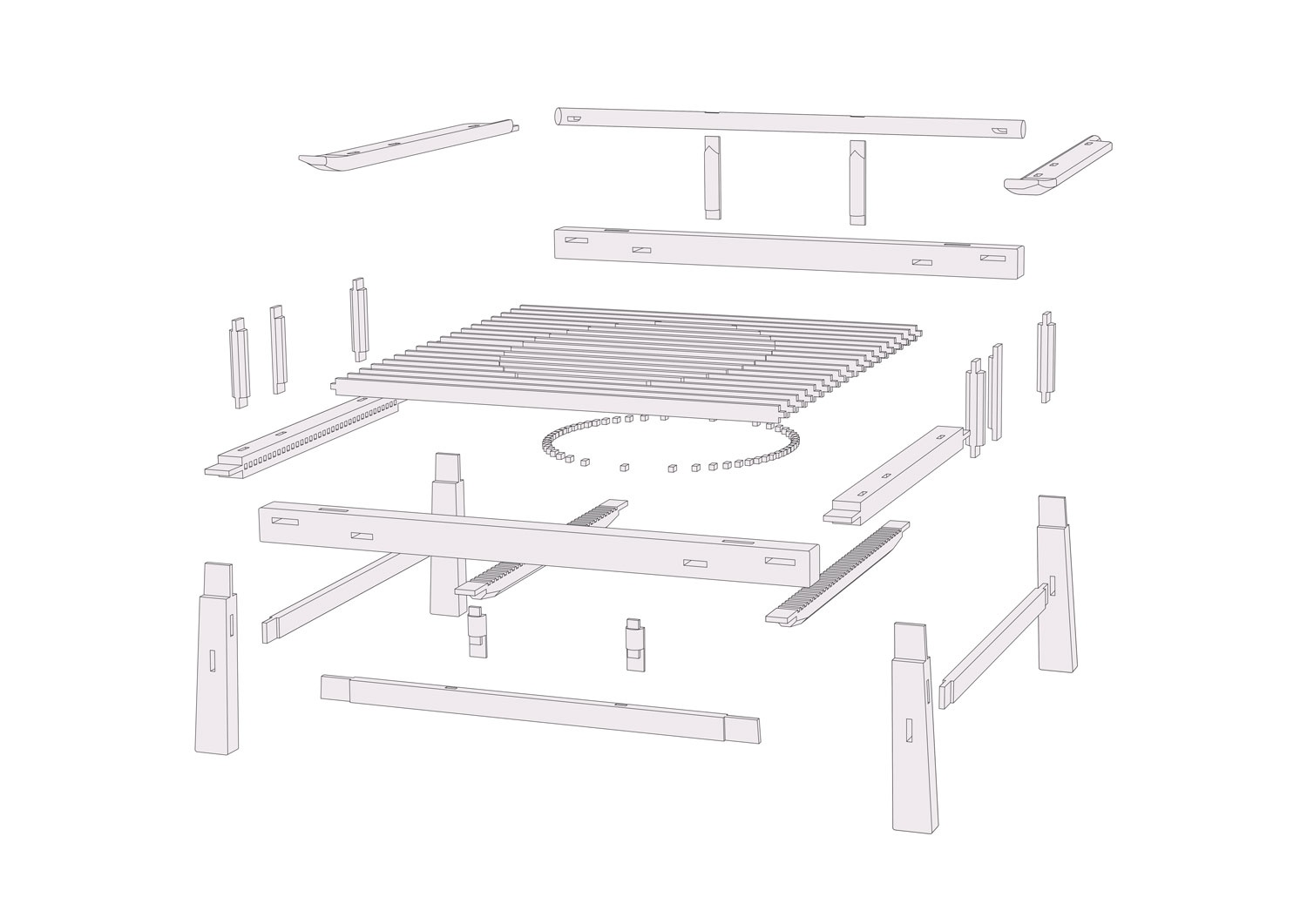 Wei Chair and its structure diagram

Different from the superficial imitation of the Chinese style from the past, like the Orientalism, Hong's design pursues what he described as the true 'oriental rhyme'. He once said: 'It’s unnecessary to lock ourselves behind the door of narrow nationalism, for if the world follows only one direction, like how everyone follows the West, the so-called Chinese design is going to lose its unique identity and become the same. That will be a shame.' Hong managed to materialise the metaphysical context of 'oriental aesthetics' into physical objects. This may help more people to better appreciate the contemporary Chinese style in design.

Based on the profound comprehension of classic Chinese furniture, Hong has created excellent collections of chairs. They are all derived from traditional Chinese artistic conception, handmade with sophisticated mortise-tenon joint (sunmao) technique, and result in a surprisingly refreshing new look. 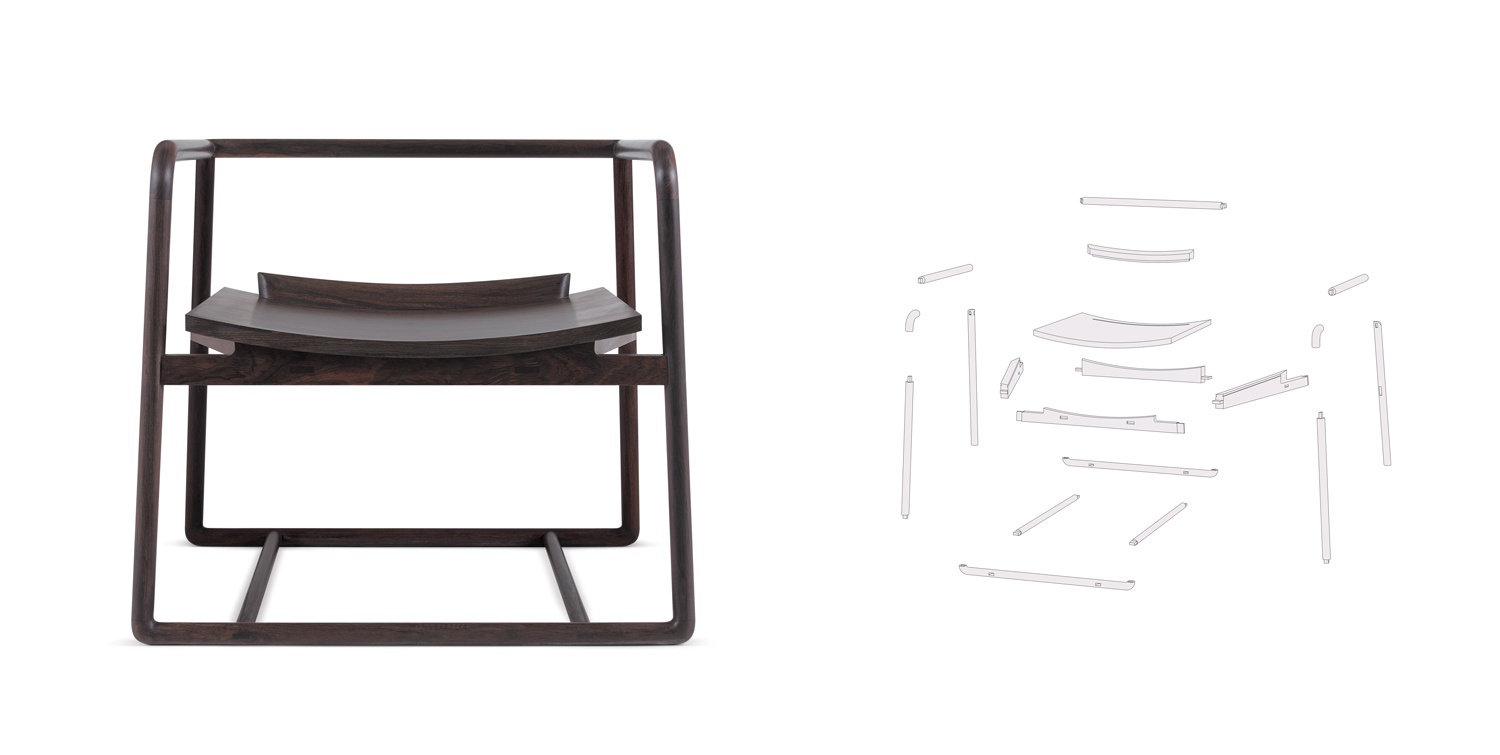 Pin Chair and its structure diagram

Pin Chair adopts a square frame structure, combining lines with planes. The two ends of the seat panel are slightly raising, forming a shallow hoop that is comfortable to sit in. It merges modern minimalism with the peaceful sense of Zen, unveiling beauty with simple shapes. The chair gets rid of the unnecessary decorative elements in traditional Chinese furniture, leaving only the minimal frame with a touch of Zen aesthetics. It uses crude wood to demonstrate a perfect combination between ancient handicraft techniques and contemporary taste. 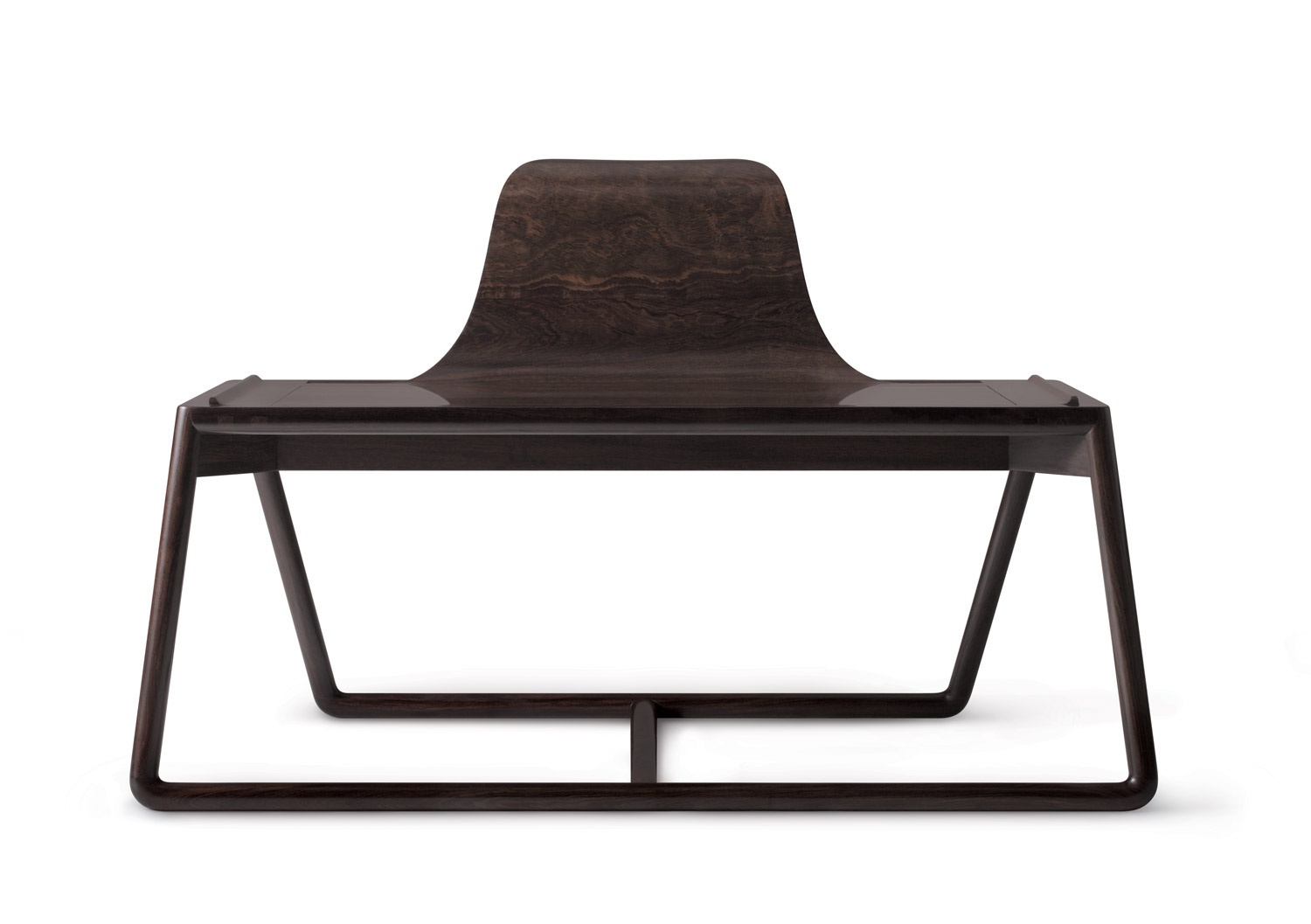 The Gui Chair looks simple but has a stately feeling to it. The elegantly curved back stretched down to produce a wide and stable seat. On each end of the seat panel, there is a short bar, like a dam on the river-like surface of the panel, giving the chair a sense of exquisiteness and poetic imagery. The front frame of the chair leg is outwardly stretched while the back draws inwardly, projecting a visual effect of orderly crossed lines allowing the chair a slightly different profile when viewed from different angles. Gui keeps the natural colour and pattern of the crude wood in order to show the audience the nature of chairs. It attempts to interpret the Chinese philosophy of “demonstrating the way of things (Tao) in the objects” by integrating traditional concept with modern style. It is considered an ideal way to preserve the essence of tradition. 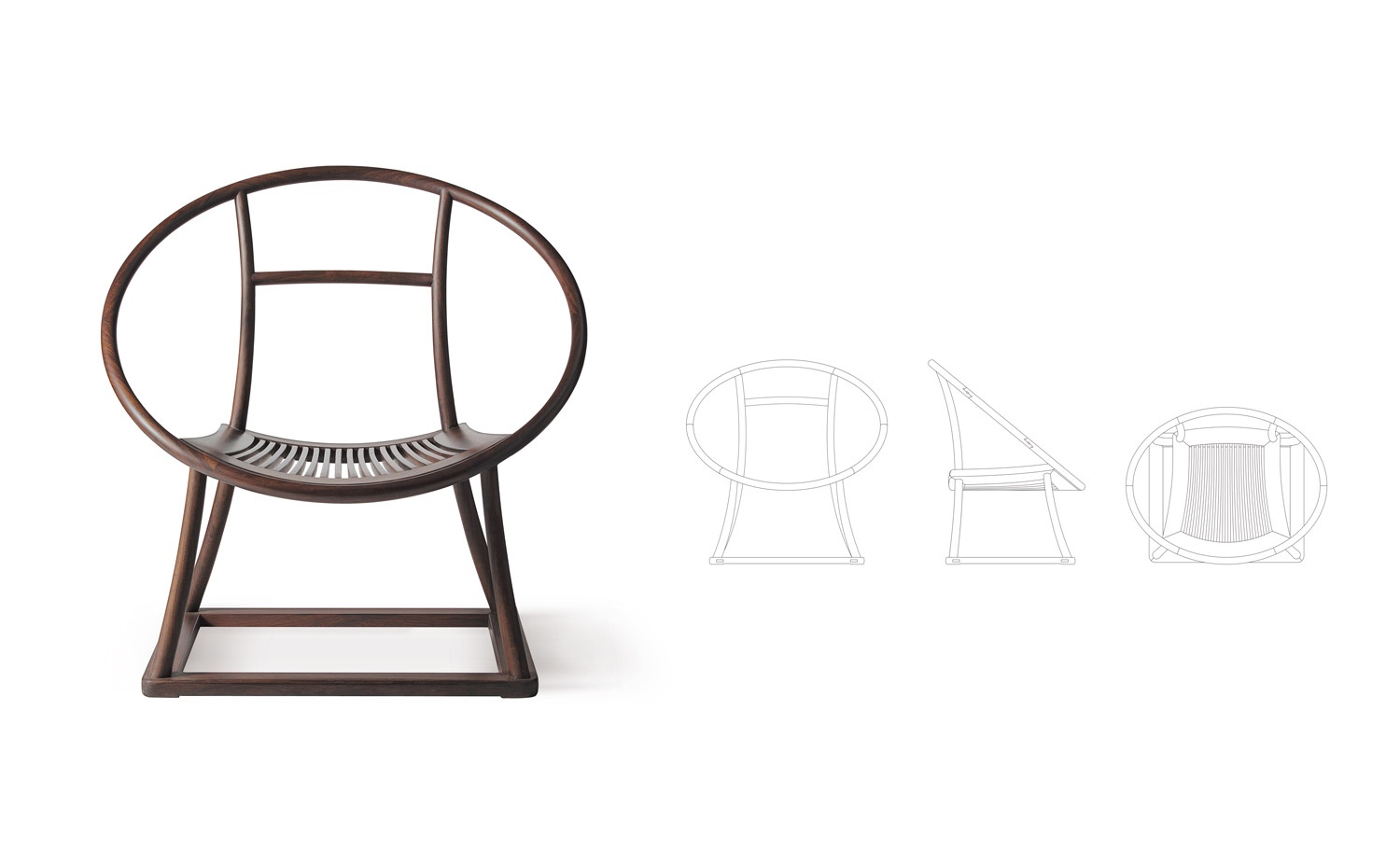 Jian Chair and its three-view drawing

Jian Chair attempts to create poetic imagery of ‘in between the heaven and earth', for ancient Chinese describe the sky (where heaven is) as 'round' and earth 'square'. These two shapes could be easily perceived from the design. The lines at the back could be viewed as the shape of a bridge while the oval frame of the chair reminds one of the full moon, indicating that the heaven and the earth are connected in harmony. 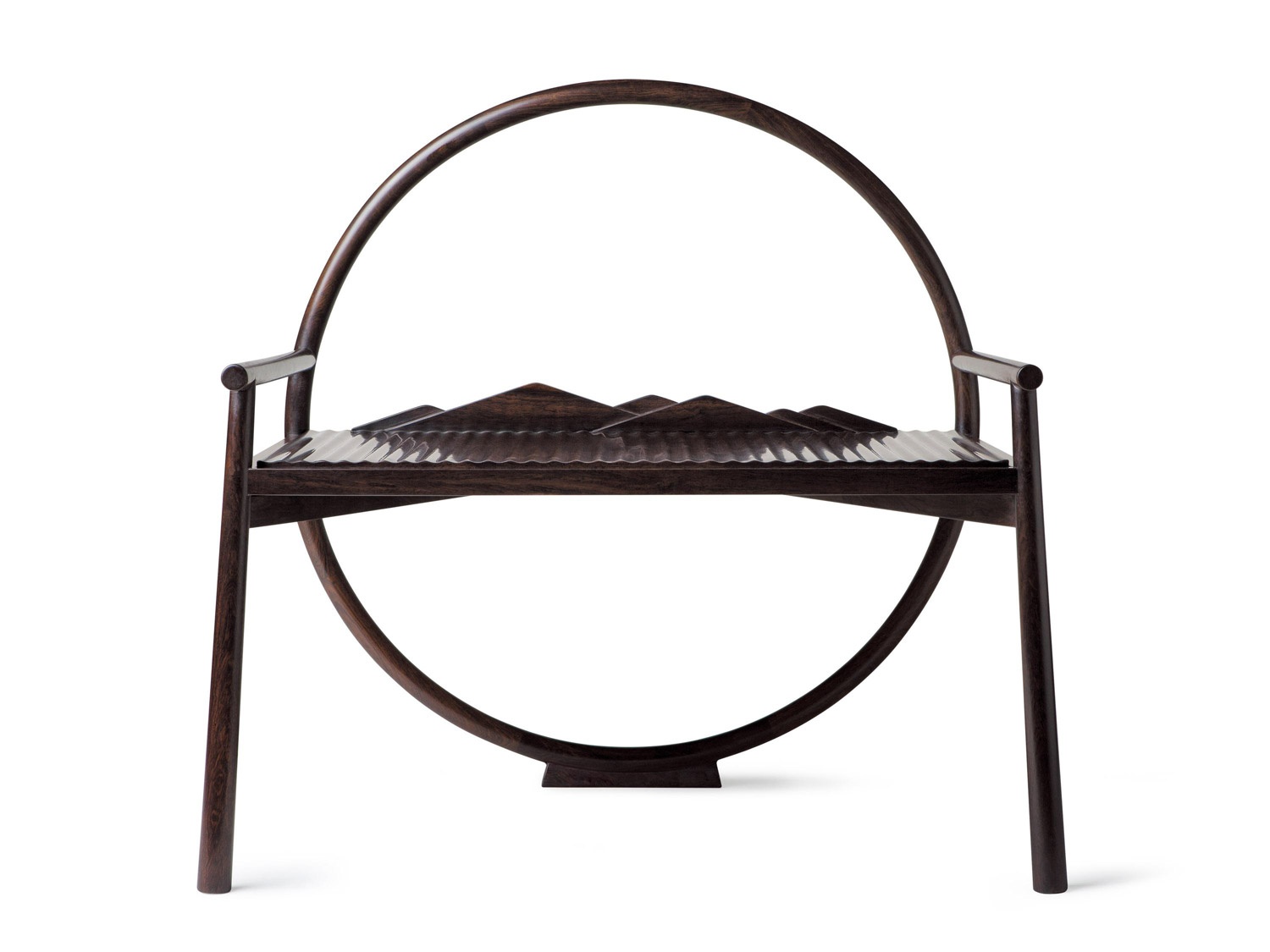 Jing (Mirror) Chair adopts a circle shape typical to resemble Chinese aesthetic conception, similar to Jian. What it tries to manifest is a world in the mirror. The design of the chair projects an image of traditional Chinese painting, in which mountains on the rippling river are presented at the foreground of a bright full moon…It creates a tranquil night scene of the moon shining on nature’s beauty with effortless simplicity.

As part of the Wei series, Jing also appears in the form of 2D artwork. In these posters, the mortise-tenon joints are redesigned to be the image of mountains, a visualised interpretation to the Chinese character for “mountain (山) ”. The artistically twisted calligraphy characters are arranged in a way that is in contrast with the formal printed characters besides creating a vivid impression of the reflection and ripple of 'water'. The chair itself is presented at the background of the poster as a silhouette, allowing it to be merged into the beautiful imagery of mountains and water on the poster and deliver a sense of dreamlike peacefulness.


The most complicated piece of furniture Hong has designed is unquestionably the chair of Xi. The inspiration came from a traditional Chinese toy: Burr puzzle. It is also called the “Luban puzzle”, as Luban is the grandmaster of Chinese structural engineering and carpentry. He invented numerous clever tools for handicrafts that have passed down through generations till this day. Xi is, therefore, a piece of work paying tribute to Master Luban and all craftsmen in the world. 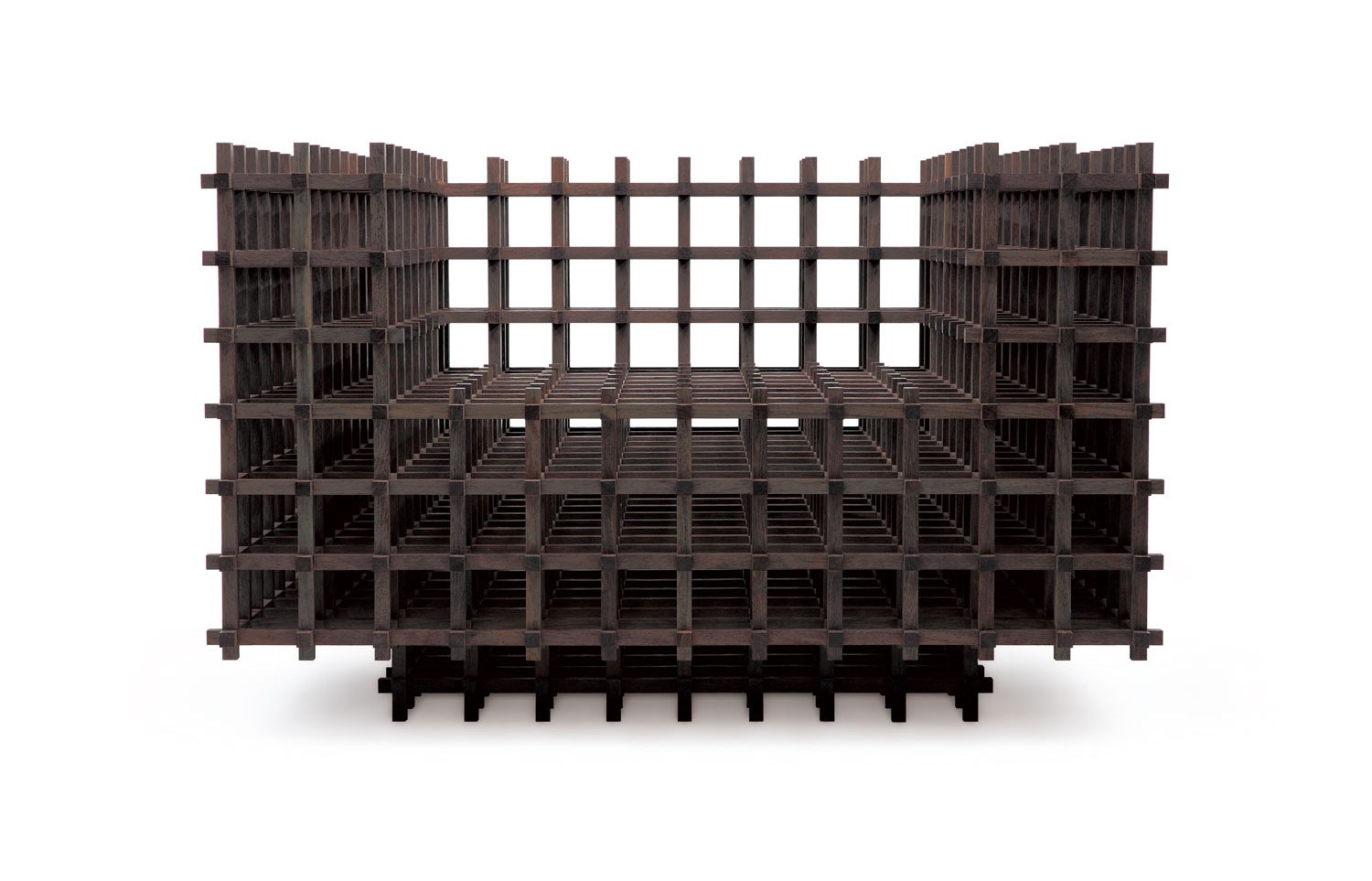 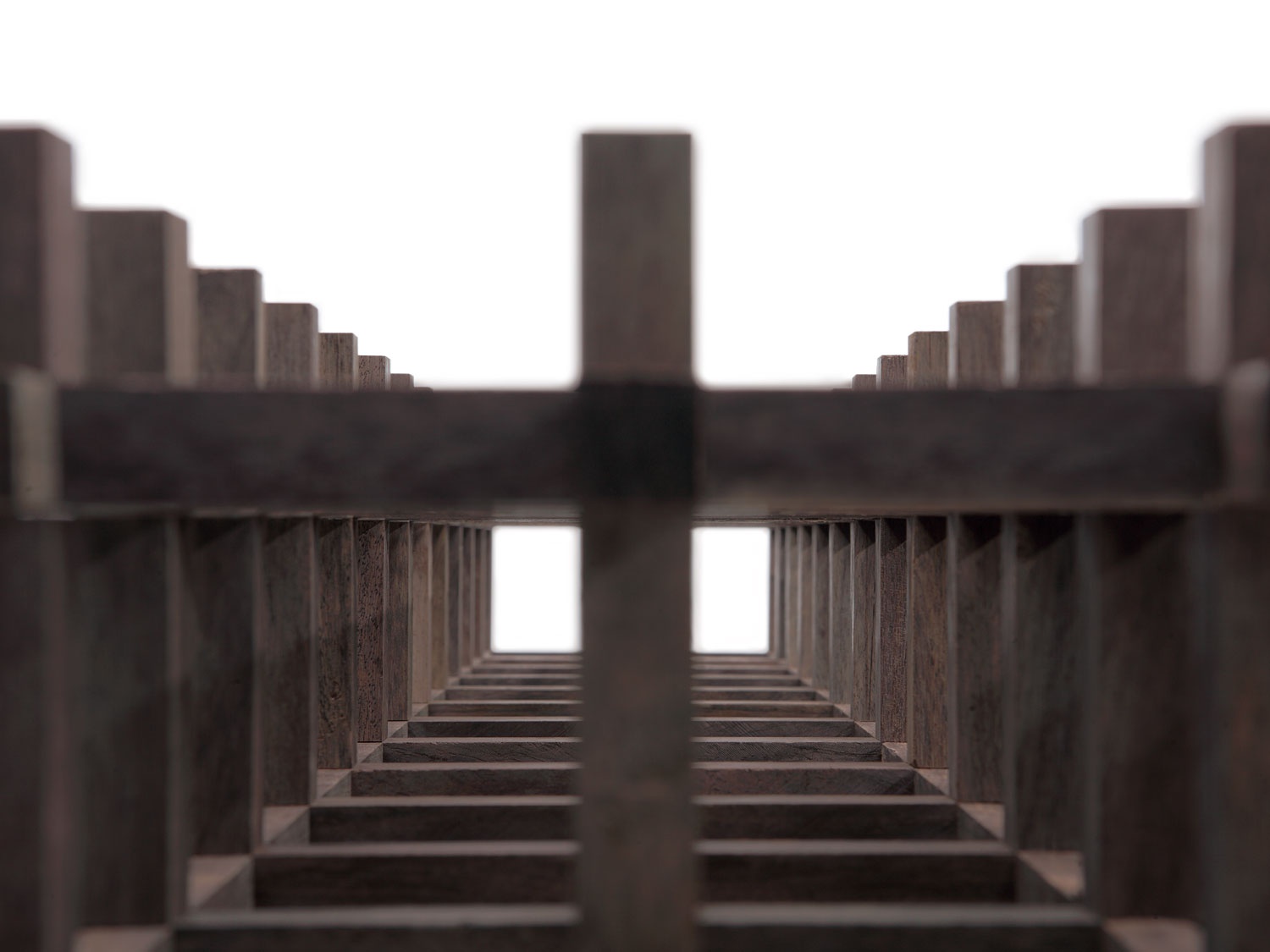 Xi Chair is fully handmade as usual. It makes clever use of the mortise-tenon structure to splice 327 parts into a number of similar sets which are put together in a repeated manner. Each set can be taken off and reattached by turning at a certain angle. Regardless of which angle one views the chair, it always produces a visual effect of perfect geometric shapes and layers covered in light and shade. The designer did not stop at building only a comfortable chair to sit in but goes beyond the conventional principle of furniture-making which sees function as the ultimate pursuit. Conversely, he integrated oriental wisdom and philosophical thoughts into the design, hoping to transform the way people think about chairs and redefining them. The puzzle-like structure of Xi never fails to leave viewers in awe. 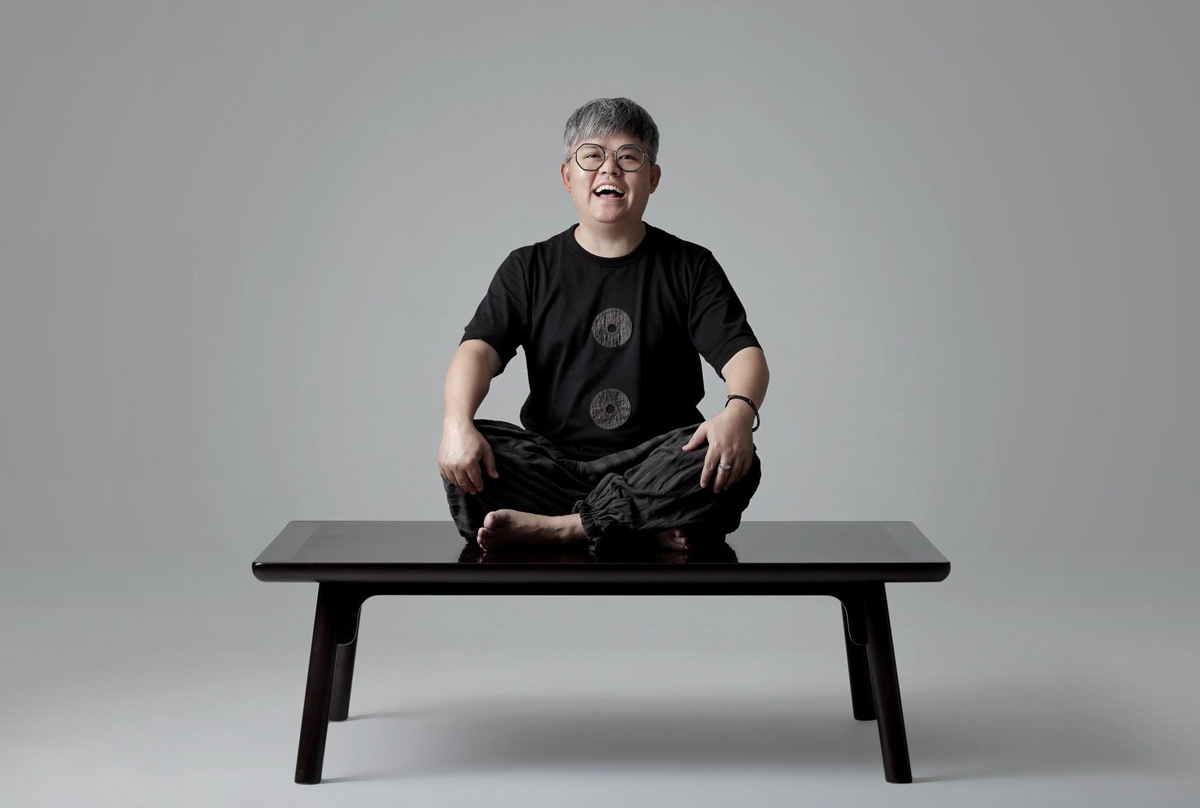 Hong is a member of the Alliance Graphique Internationale (AGI), the Binding Design Art Committee of the Publishers Association of China and the Japan Typography Association (JTA). He established Day Day Up Design Consultancy company in 2002 and created his first personal furniture brand Wei in 2014. The brand aims to explore the concept of design in the context of China from the perspective of humanities. He has won over 200 national and international awards and has participated in various important projects, such as redesigning the provincial profile of Guangdong and designing the symbol of Guangdong Pavilion in Shanghai World Expo. The posters he designed have also been collected by a number of well-known universities, galleries and museums. 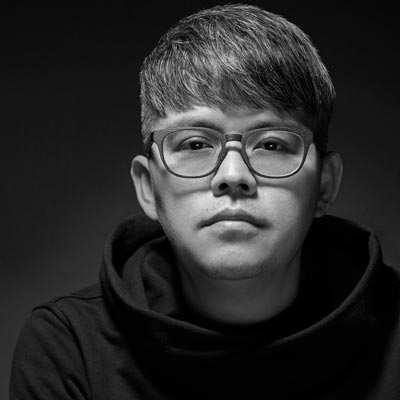