In August 2019, we have successfully fostered the collaboration between Hugh Miller, the award-winning British furniture designer, and the ‘Peony Award’, organised by Department of Cultural Tourism of Henan Province, Luoyang Government and Tencent. The project aims to create fresh, original designs that are inspired by the elements of Luoyang’s intangible cultural heritage.


During 14 - 17 September 2019, Hugh Miller was invited to visit Luoyang by the organisers. Miller said: “Having the chance to visit Luoyang for this project was really important. My task has been to design products that are inspired by the amazing heritage of the area, and so seeing it all for myself was a crucial part of my process. There were so many inspiring moments from my time in Luoyang. The enormity and complexity of the carvings at Longmen Grottos was awe-inspiring; Finding out about the peony and its importance to Luoyang, and the peony stone that’s found here was really cool; I liked hearing about the oral history and legends surrounding the founders and rulers of the city, especially Wu Zetian and Zhao Ji.” Later, he used these elements in his lamp designs cleverly for the Luoyang project. 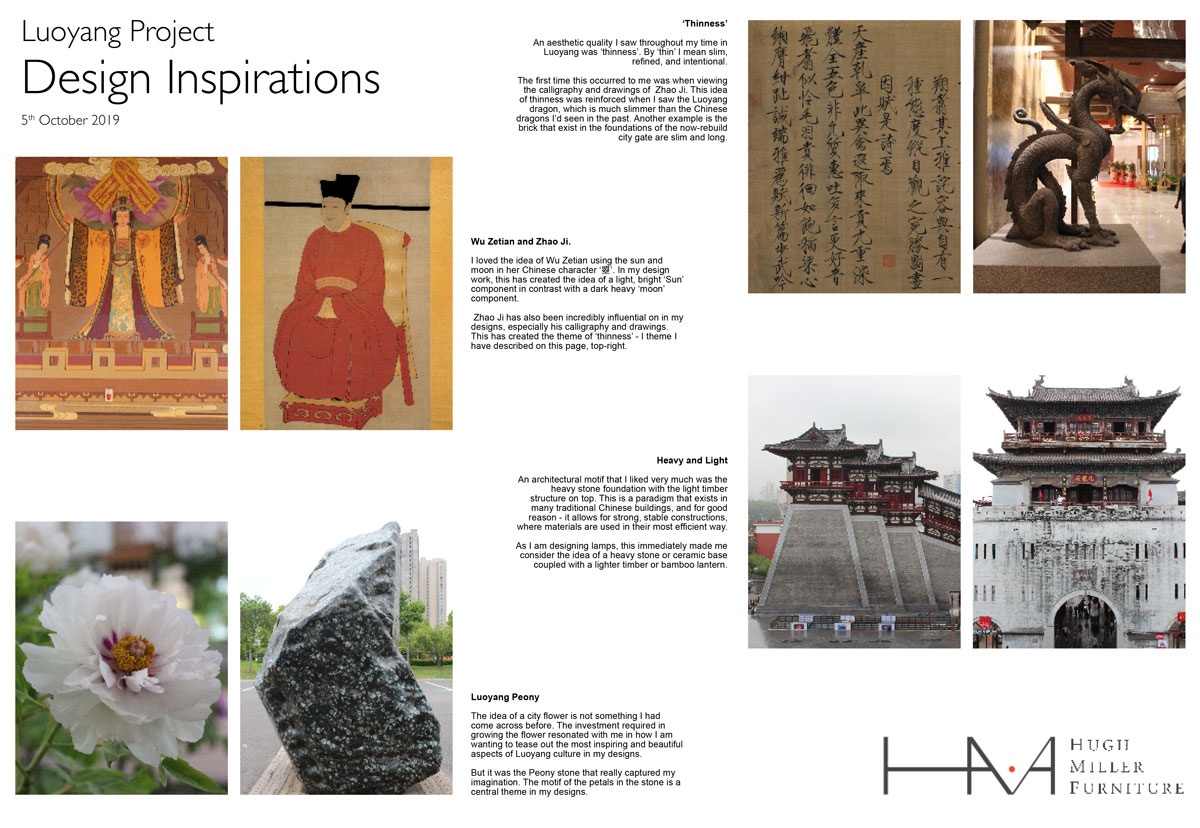 Throughout the visit, Miller’s favourite part was meeting the craftsmen who made traditional lamps and bamboo work. “I love to learn about new materials and techniques, and watching the skill of these men manipulated bamboo and paper was really special for me.” 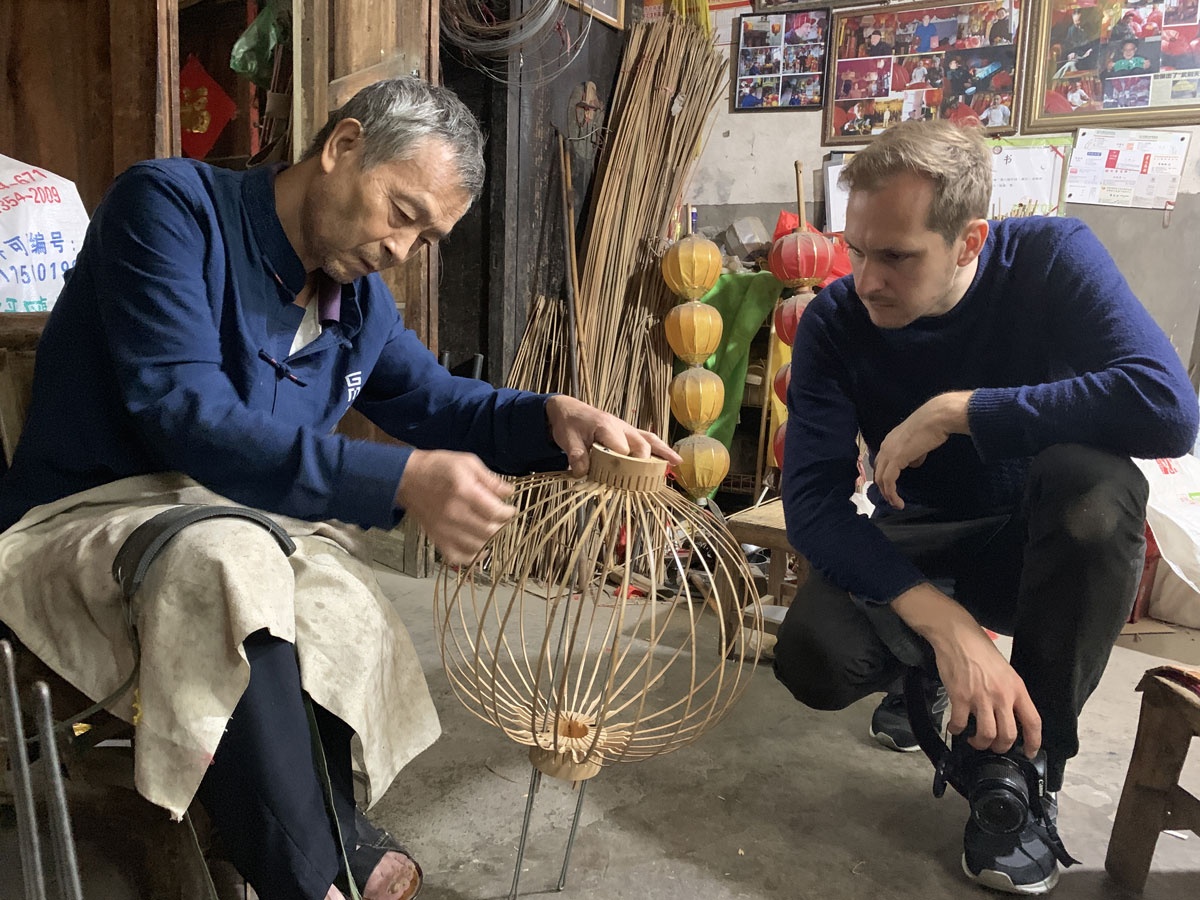 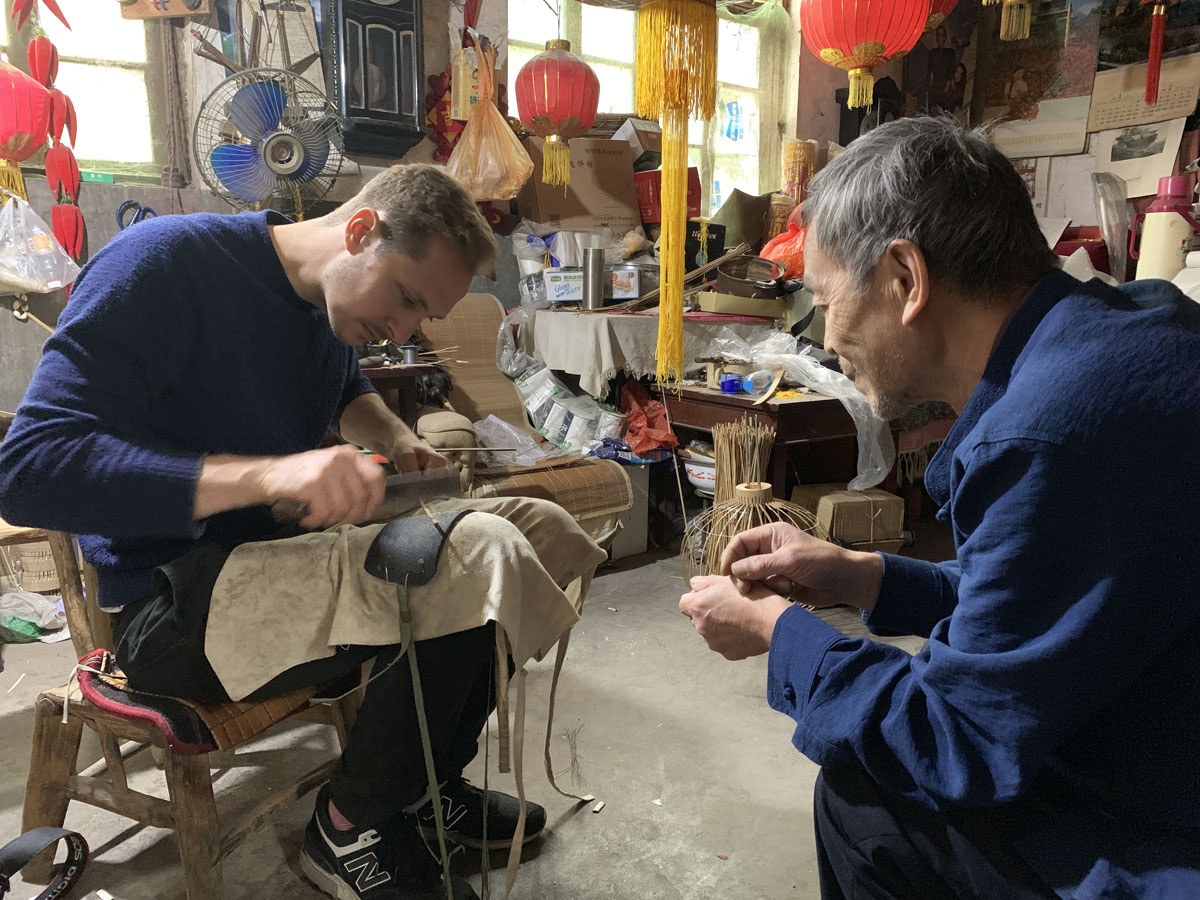 We interviewed Hugh Miller for more comments on the Luoyang project.

What is your first impression of Luoyang?

My first impression of Luoyang was the rain. It was very wet during the time I was there, and this was nice, as it reminded me of home.

Which of the scenic spots in Luoyang impressed you most?

I loved all of the places I visited in Luoyang, but the thing that I found most impressive was the Longmen Grottoes. The carving is just so huge and detailed and amazing. I particularly liked the two warriors to the left of the biggest buddha. Their costumes and armour were my favourite bits.

What are your feelings about the peony, Wu Zetian and Luoyang city?

I had two favourite things. The first was the Peony stone. It is just so beautiful, and unusual. I found this really inspiring. The second thing was the legends and myths about the history of Luoyang. I love the stories that have been told over so many generations about the queen and the emperors and the battles and victories. These stories are the oral history of Luoyang, and I want to use these in my designs.

What is the inspiration and idea of your work?


Having seen the lantern making tradition in Luoyang, I wanted to pay homage to this and design a lamp that was inspired by the amazing things I’d seen in the city. There are three key elements that I wanted to explore in my designs. The first is the idea of ‘Thinness’ – this was inspired by the slim Luoyang dragon, and by the slender calligraphy and drawings of Zhao Ji. The second is the peony as a motif, especially the way it appears in the peony stone; and the third is bamboo, and how it can be worked and manipulated. 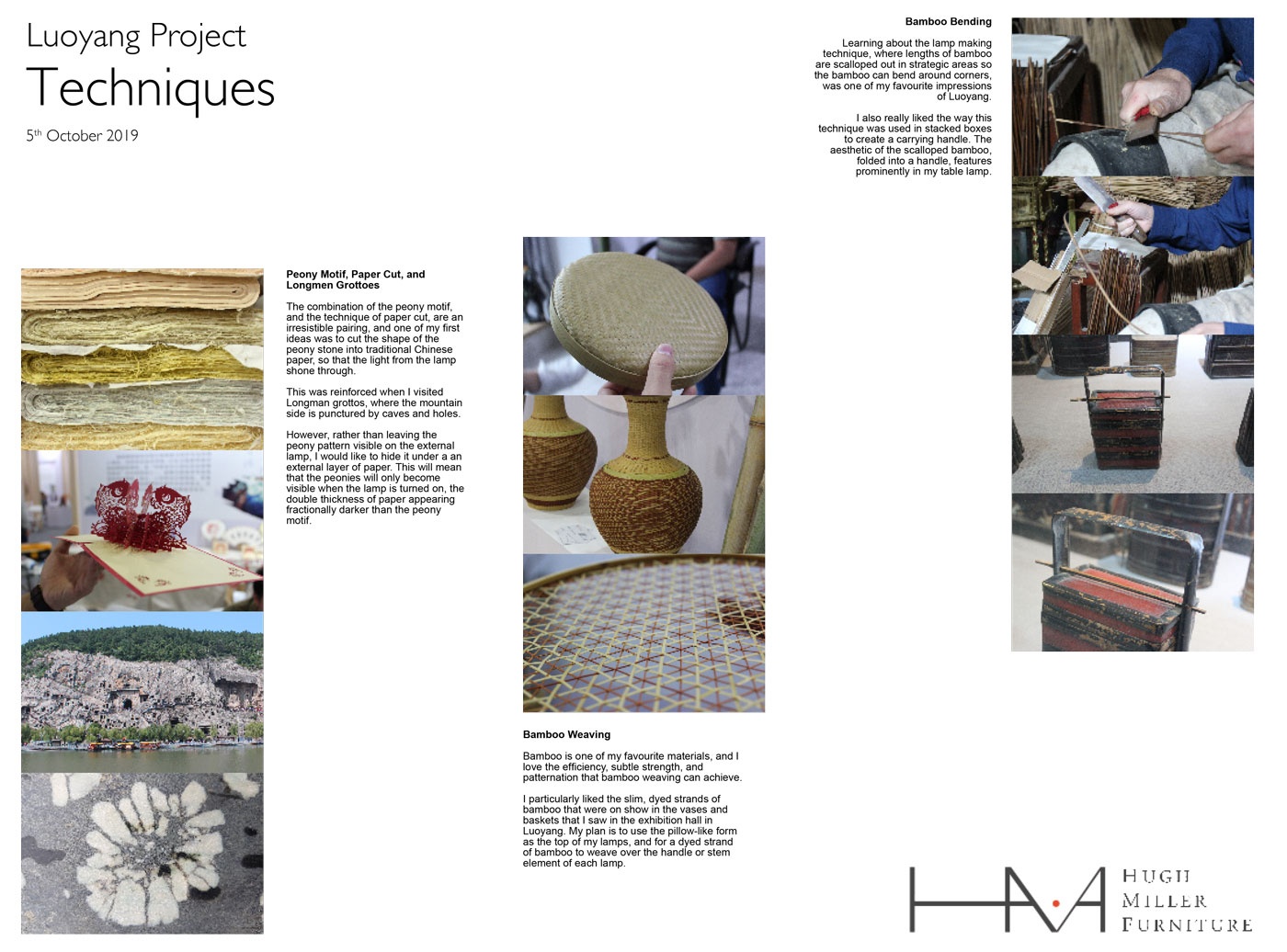 These key elements are the foundations of my lamp design. The structure is made slender pieces of natural bamboo that are bent with steam at the corners to form a carry handle at the top. The lantern itself is made from translucent pieces of traditionally made paper, and when the lamp is turned on, a paper-cut motif of the peony appears in the light. It’s a simple design, but it’s embedded in the heritage of Luoyang. 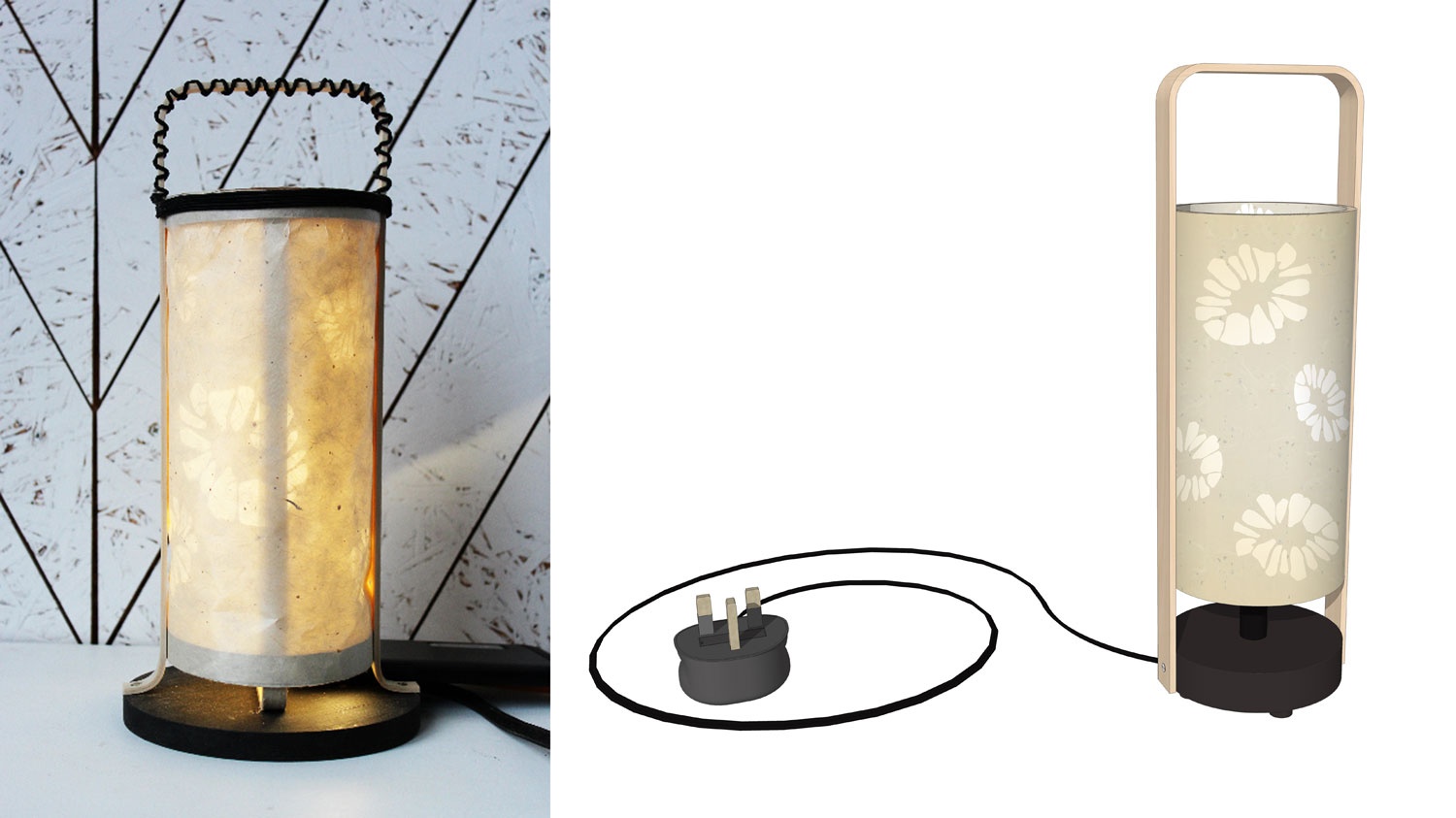 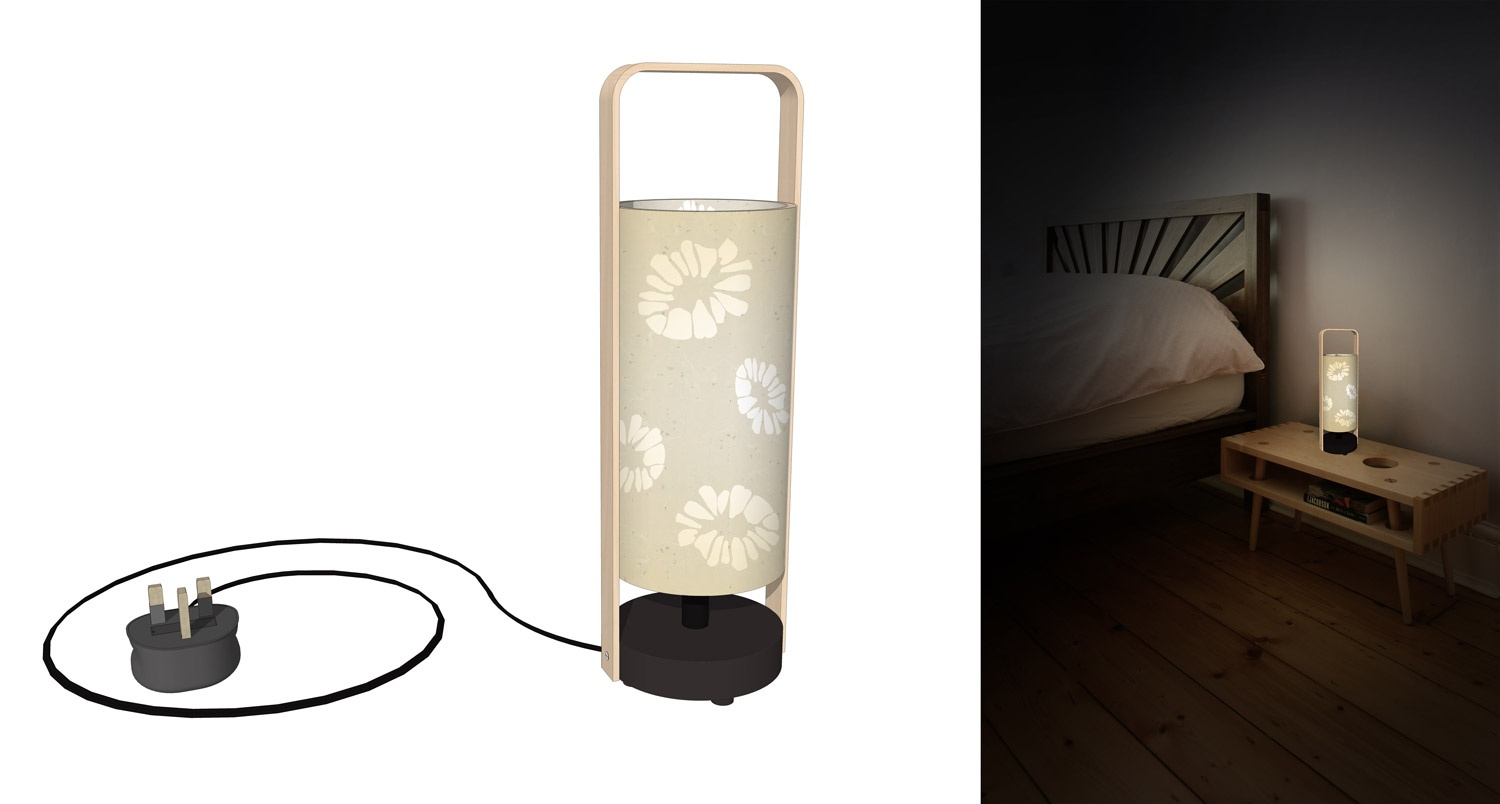 What do you think the future of Luoyang would be?


I’m really excited to see what the future holds for Luoyang. It’s an amazing place with such a rich history – from the silk road to paper-making to the Longmen Grottoes, and the crescent-shaped fortified gate. I want Luoyang to be a major destination for visitors to come and experience, both from China and all over the world, and I hope my work in this design project can play a small part in celebrating the things that make Luoyang special.