Pan House: the trendy whisky bar inside a 200-year-old house in Suzhou

Pan House: the trendy whisky bar inside a 200-year-old house in Suzhou

In October 2017, a new whisky and cocktail bar ‘Pan House’ has opened for business in Suzhou. Unlike any other bars, it is located in a prestigious mansion house that has a history of more than 200 years old. Yuqing Li, Xin Huang and Ning Zhong are the initiators the regeneration project of the house. 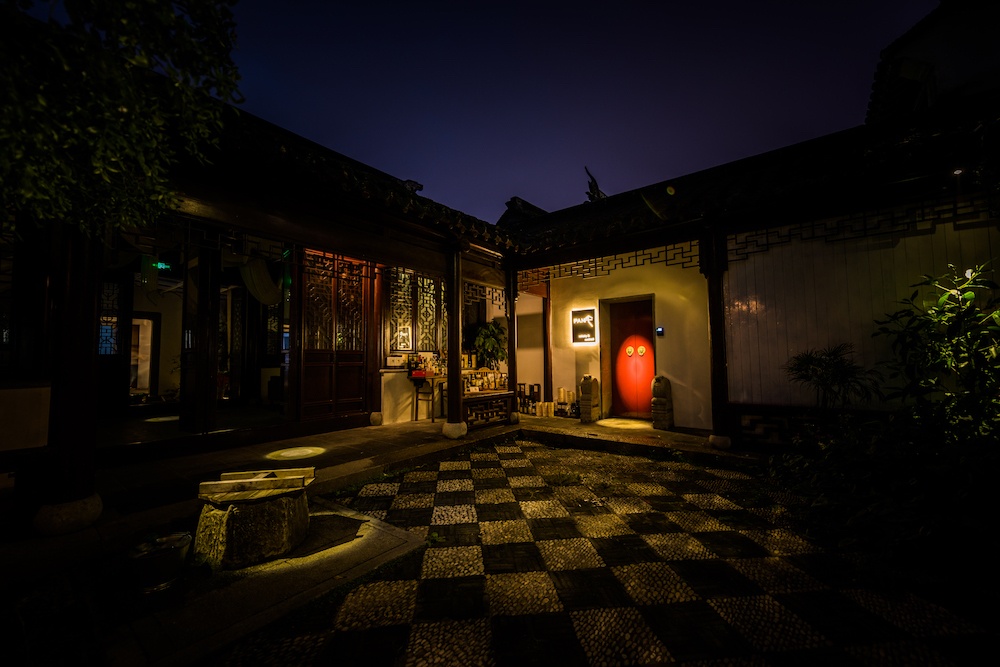 The original mansion house is the former residence of Shi-En Pan, who had been an important statesman working for four different emperors around 1793-1852 (Qing Dynasty). There is a museum about Shi-En Pan and the culture of Suzhou’s Zhuangyuan culture inside the mansion. 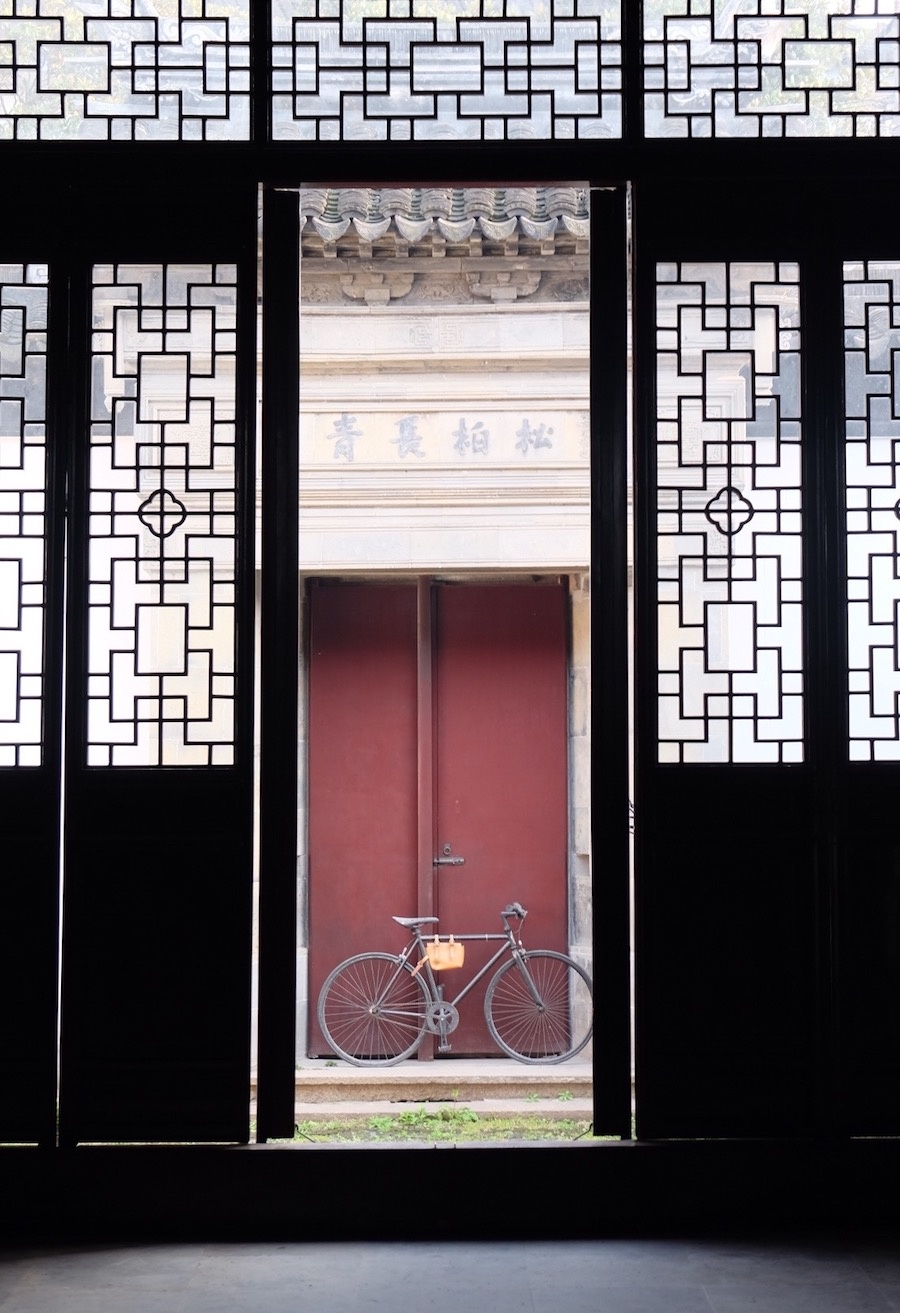 One of the main project leaders, Yuqing Li, is not an architect. In fact, he is a well-known hair stylist in China working with many celebrities and one of the founders of UPPER CUT. Two years ago, Li did the first renovation project in Shi-En Pan’s former residence, setting up a branch of Upper Cut inside the mansion. The saloon is very elegant, giving the customers an almost time-travelling experience. 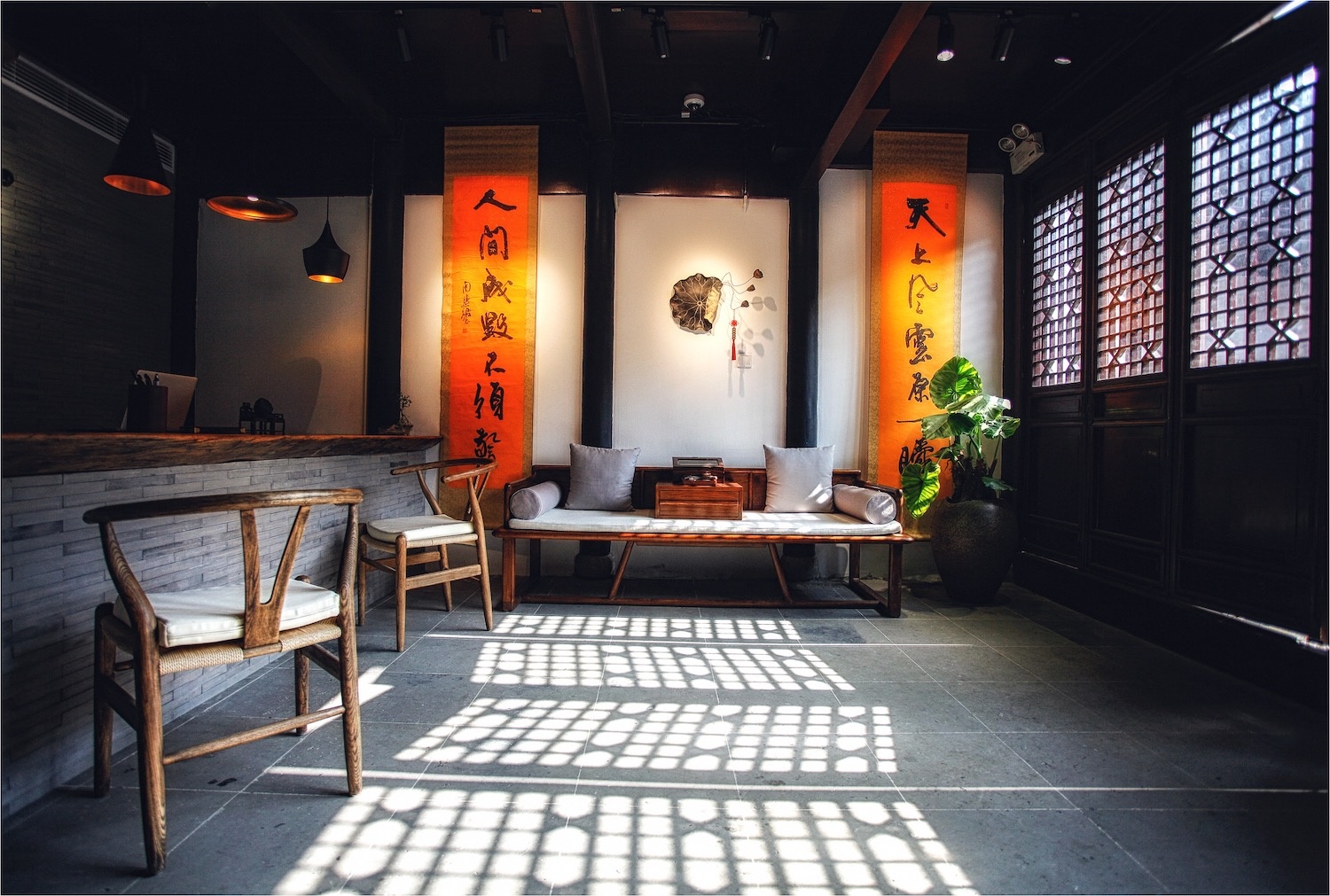 Now Pan House, the whisky and cocktail bar, situates next door to the saloon. The starting point for Li is that he wants to have a nice venue for his saloon’s customers to relax and have drinks. Li himself is a huge whisky fan, and he has always wanted to open a bar. He said when he saw the original mansion, he was already imagining drinking whisky while looking at the traditional Chinese ink paintings on the wall, “it will be very satisfying”. Li also wants to install a ‘young heart’ into the old house, and mix up different lifestyle aesthetics from the ancient Far East and the modern West. 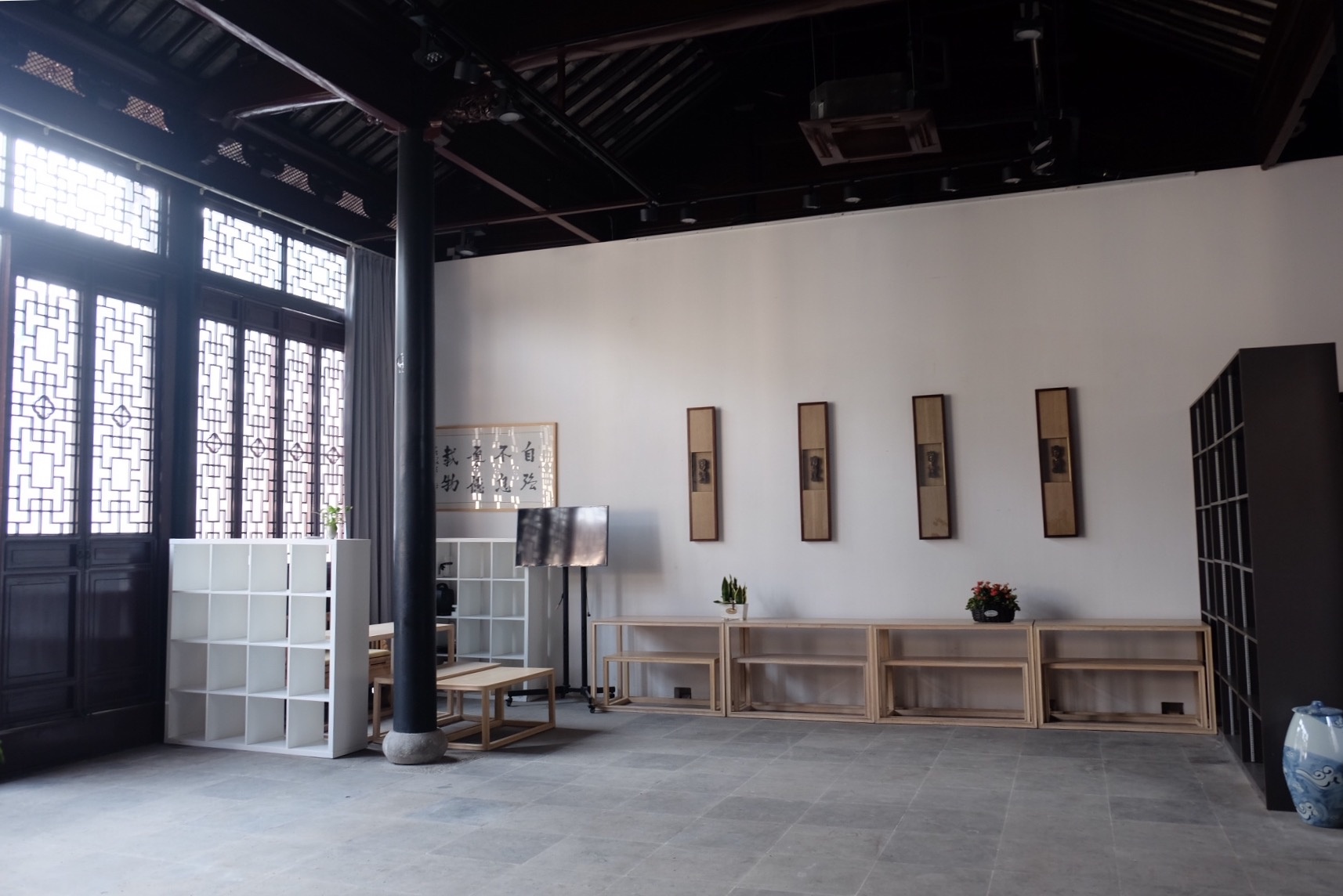 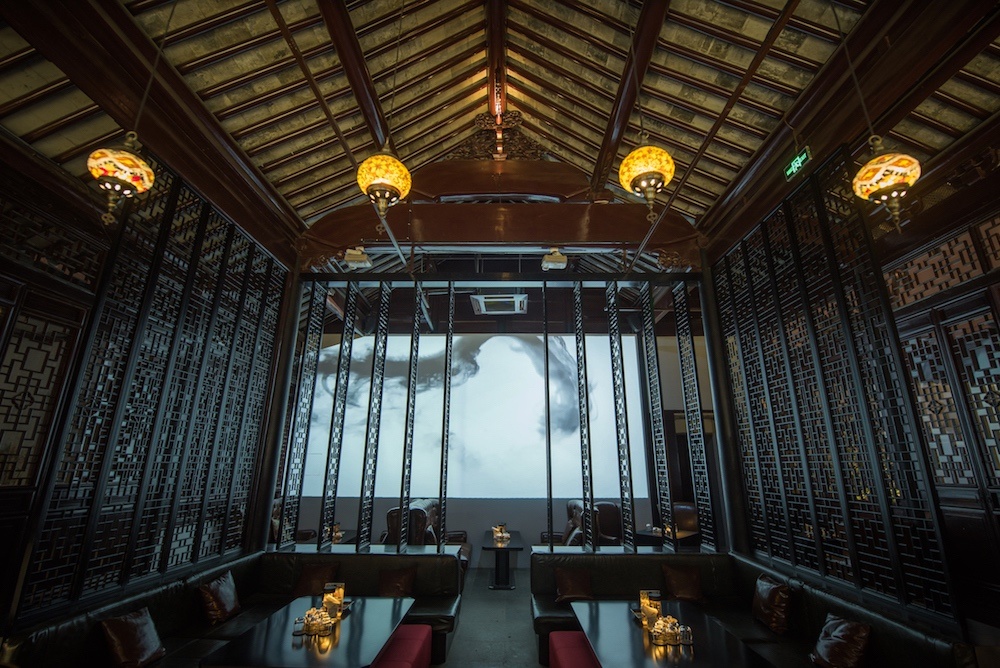 Above: the original mansion's courtyard; Below: Pan House's courtyard

There is a tricky problem in constructing Pan House that everything in the original building cannot be altered, not even possible to hammer a nail in. However, this difficulty has led Li to utilise the advantages of the existing construction. The four original tall pillars made of Phoebe zhennan has been integrated with carved wooden screens that are 3.6 metres tall, to create a semi-private space and the centre of the bar. Another highlight appears in the wine cabinet which is 9 metres wide and 4 metres high, taking up 36 M² vertical space. It gives customers a striking impression when they first enter the bar. A series of curated pictures of Chinese paintings and calligraphy are projected onto space in the middle of the wine cabinet, as well as the massive white wall on the other side of the bar. Instead of the traditional way of hanging physical artworks, the modern technology benefits viewing in the darker environment of a bar, while promoting Chinese art culture in the adequate atmosphere. 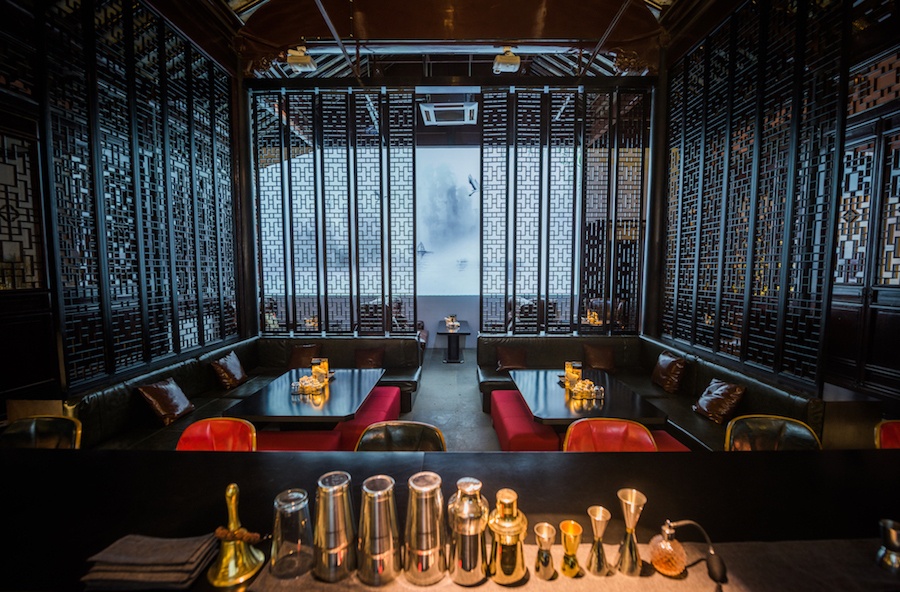 Since the wine cabinet and the bar area are in black, Li chose the ‘Chinese red’ and green as the colours of the chairs and sofas. To make the house feel less gloomy and cold, Li choose only to use warm lights. 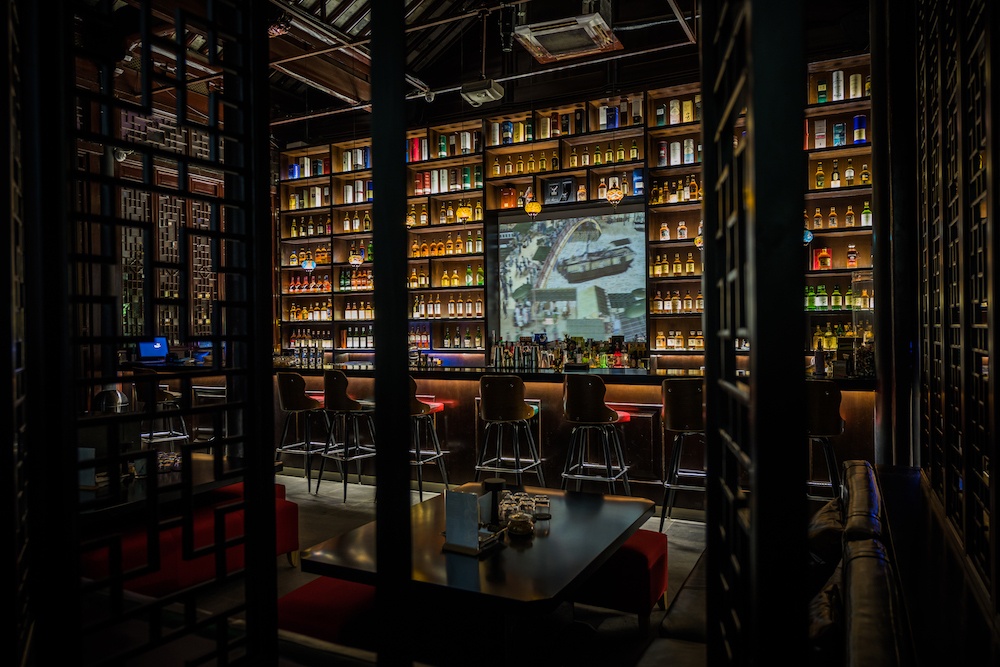 The courtyard has not been changed much. Li planned a green wall, but it has not revealed its full potential yet since the plants are still growing. There is another projection on the wall in the yard. Li said the environment would become very charming when it is raining, having drinks in hand and jazz playing in the air. 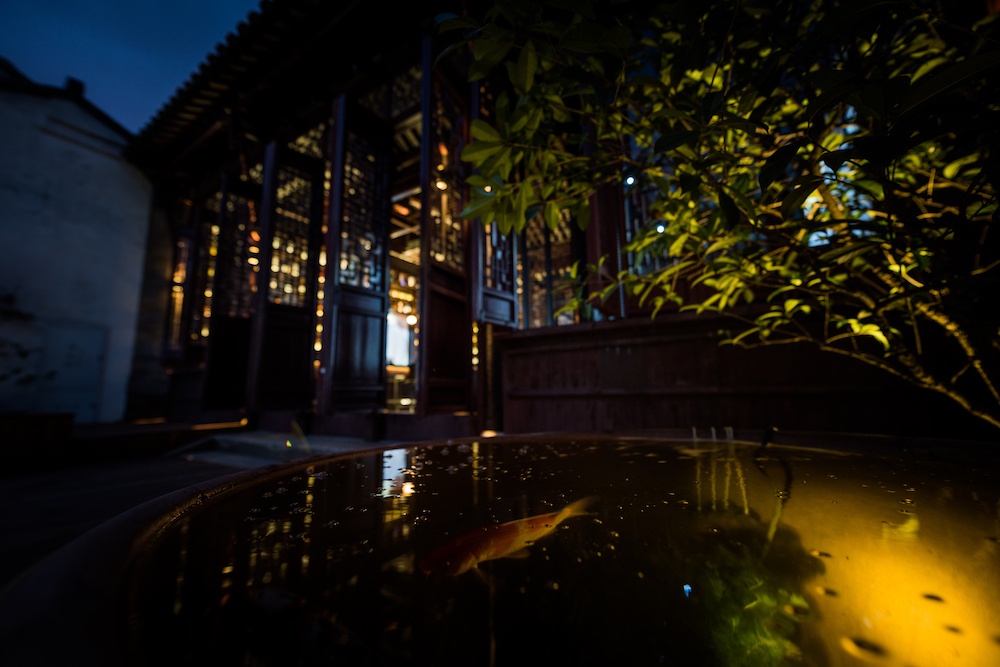 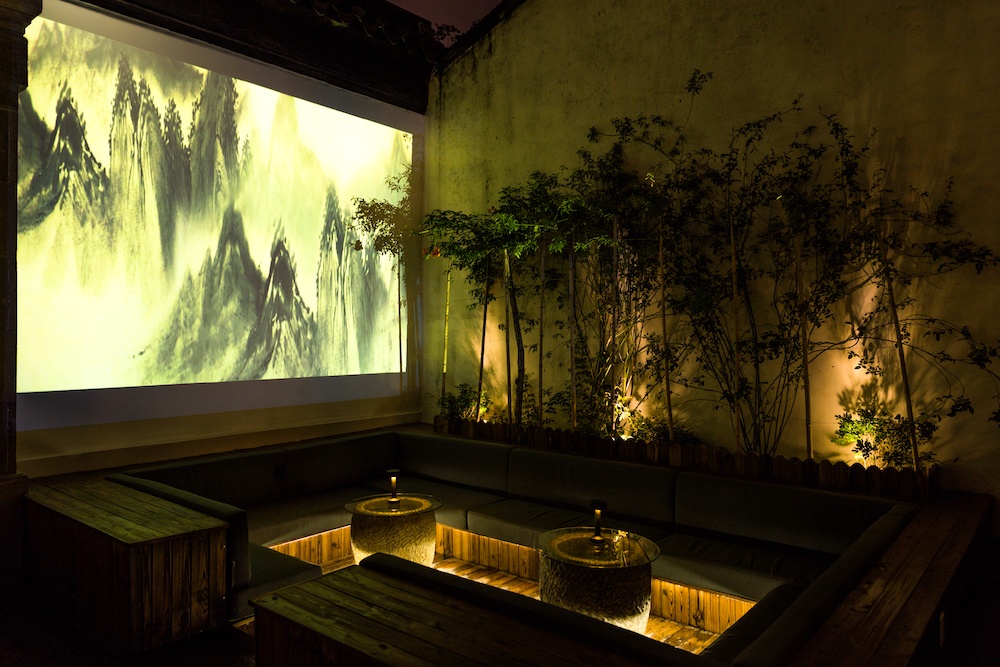 As Li is not a professional designer, he said he just designs with his guts. The essential thoughts for him are that people can flow easily in the space, the strong visual impact, and play with lights and shadows. “My understanding of design is that it should be useful, beautiful and humanised. My work has started from there.”